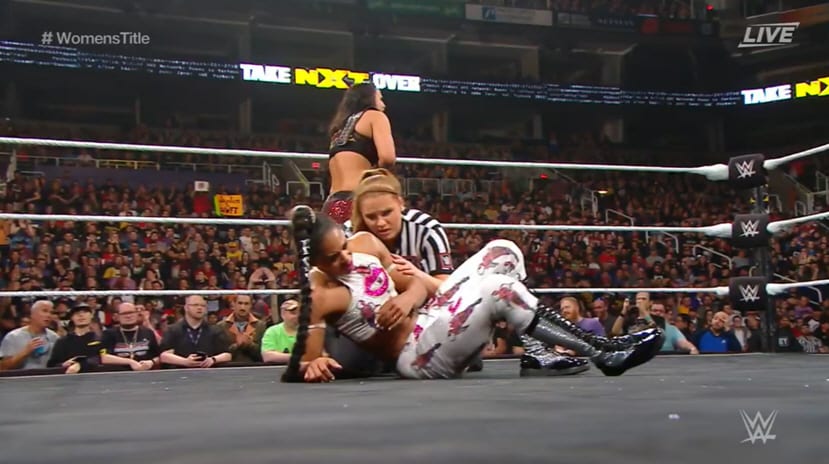 Shayna Bazler walked into NXT TakeOver: Phoenix as NXT Women’s Champion, but she had a tenacious opponent in Bianca Belair who was putting her own undefeated streak on the line as well.

The match had a big fight feel with Kayla Braxton’s introductions and the crowd was ready to see this one go down.

The brutality of Baszler was evident early on and continued on the outside as she grabbed Bianca’s massive braid and pulled her through the ropes smashing her against the ring post.

Then Baszler continued her assault on Belair on the inside with some mounted punches and she wrapped Bianca in an arm submission and continued to dismantle her. However, Bianca Belair kept kicking out and she didn’t submit.

Shayna called Bianca “overrated” and this seemed to set a fire under her and after Bianca hit a spear Baszler found herself kicking out of a pinfall attempt. Then Baszler came back with a jumping knee strike for a two count of her own.

The two started trading shots until Belair found herself swinging at nothing but air until she fell exhausted to the mat. Suddenly, Bianca nailed Baszler with a hair whip and sliced into Shayna. She really was bleeding from the side.

The referee took a bump and then Bianca Belair hit her finisher, but there was no referee counting to three. Belair had to fight off Marina Shafir and Jessamyn Duke, but the referee was still down.

Suddenly, Baszler locked her chokehold on Bianca and Belair struggled to get to her feet where she turned it into a suplex of her own showing unbelievable strength.

Belair tried to hit a but had to fight off Duke. Then she missed the dive and ended up in another Kirifuda Clutch. Belair fought to get free as the crowd chanted “EST.” Belair got to her feet, but Shayna didn’t let go. Finally, Bianca Belair fell to the mat and the referee called for the bell.

This means that Shayna Baszler is still the NXT Women’s Champion, but Bianca Belair is no longer undefeated. As Shayna celebrated with Marina and Jessamyn, Belair sat back and it looked like she took the loss well.