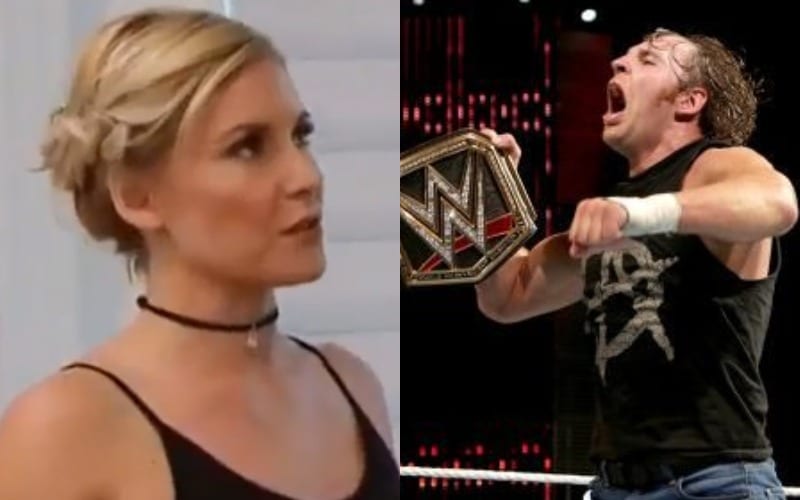 Dean Ambrose created many moments as the Lunatic Fringe that the WWE Universe will never forget. One of the biggest nights of his career came at the 2016 Money In The Bank event when he won the WWE Title.

During Not Sam Wrestling, Corey Graves said that he was watching WrestleMania 31 from the skybox and he texted his friend Seth Rollins to congratulate him on a great match against Randy Orton. “You ain’t seen nothing yet,” was the reply Graves received. He didn’t read into it then but figured it out once he saw Rollins run down with his Money In The Bank briefcase to cash in and close out the show as the new champion.

Renee Young chimed in and shared a story about the night her husband Dean Ambrose, who she calls Jon even though she has another pet name for him. Her own husband didn’t give her any notice at all unlike what Graves received from Rollins.

“It’s magical, yeah like when Dean cashed in his Money In The Bank and won the WWE Championship. He NEVER tells me anything. But yeah, I heard some people backstage say, ‘Yeah, make sure you watch tonight’s main event,’ I was like, ‘Okay, what?’ And thank god I got to get to a monitor and I got to see Jon cash in his Money In The Bank contract otherwise I would not have seen that, but to get those magical moments is like, it blows your mind.”

“It blew my mind and we got to drive home that night and we just went to our own house like, ‘Oo that was weird.’ Then we went and drank tall boys behind a gas station.”

Since Money In The Bank took place in Las Vegas, Dean and Renee did get to go right home which is a rarity for WWE Superstars, especially after they just won the WWE Title.

Ambrose’s luck on the top of the card wouldn’t last and he is now on his way out of WWE due to their creative direction. He just hates hokey promos that much.

At least his time in WWE left Renee Young with memories they’ll never forget including the night Dean Ambrose won the WWE Title and didn’t even tell his wife to expect anything.