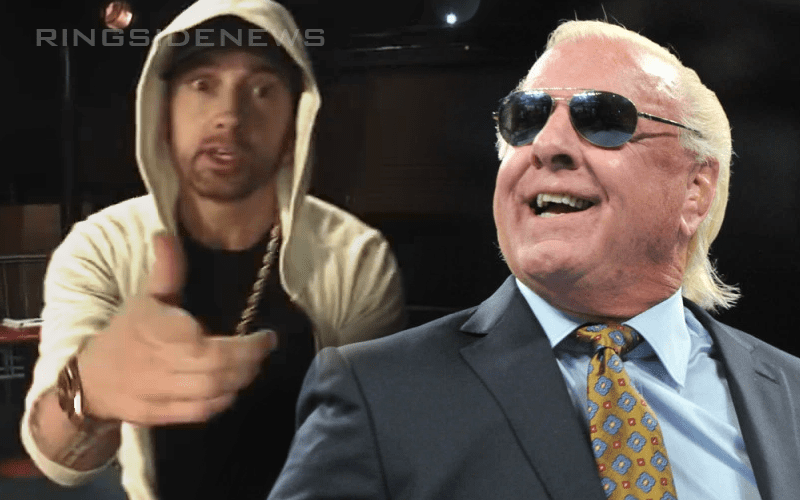 Please be advised that this article is NSFW and contains some pretty explicit freestyle lyrics from Eminem. But when you’re Eminem rapping about Ric Flair, who is a man that boasts over 10,000 sexual conquests, it’s understandable how things can get X-rated quickly.

Eminem is known for his lyrical ability that seems to just get better all the time. On the same token, Ric Flair is still stylin and profilin just like ever. Flair has given up drinking to a large extent, even though he has imbibed a few times which he was quite open about.

Flair is a big part of the rap culture anyway as he hangs out with guys like Snoop Dogg and Offset wrote “Ric Flair Drip” after the two-time WWE Hall Of Famer. But when Eminem threw down a freestyle rap recently on a freestyle track called “Kick Off,” he just couldn’t help but bring The Nature Boy into things while describing a very intimate situation.

“Told this chick she’s hot as Jada Pinkett And just stared ’til I made her think it Said, ‘Maybe we should just get married’

She’s facing me, I placed my feet with my hips square

Tell her, ‘Turn around,’ spread her legs for me, then I hit bare

Spray Febreeze in the chick’s hair Make her wheeze tryna get air I played for keeps, there’s no escaping me”

You were warned in the introductory paragraph that things were about to get pretty explicit. As Ric Flar’s legacy only grows from this point there is no telling where his name will pop up next. But if I were a betting man this isn’t the last time we’ll hear Flair name dropped in a bigger pop culture sense.