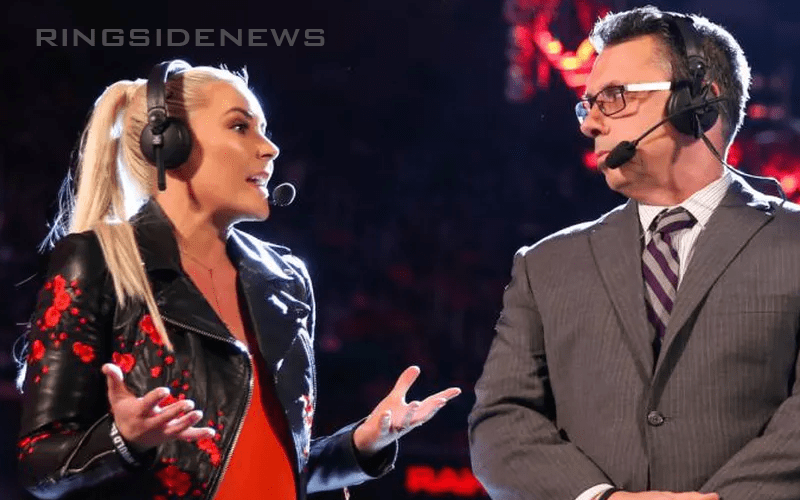 Renee Young made history as the first woman to sit on the commentary booth for an entire episode of Monday Night Raw and she soon became a full-time member of the announce team. Young was also a part of the WWE Crown Jewel event as well which was a huge accomplishment she should be proud of. But everyone’s favorite Candian bride of Dean Ambrose seems to have been slipping when it comes to pertinent things to say on television in recent weeks.

Although her energy is still there and you can’t take away her personality, the verbiage she’s been given to say doesn’t always hit the mark at all. Renee is happy and likable and knows a thing or two about some of the best parts of culture, but she can only say the lines given to her.

Dave Meltzer recently discussed Renee Young’s role on WWE television in recent weeks during Wrestling Observer Radio and how it seems like her credibility is slipping due to the nonsensical things WWE has her say into the microphone.

“Yeah, you know they’re hurting her credibility something fierce. I don’t know if she had a lot of credibility coming in but everybody coming in has a certain clean slate you know because they haven’t like said too many stupid things because they haven’t said anything yet when they’re coming in. She was certainly better than Booker and certainly better than god, that freaking Coachman who was the worst.”

“But they’re ruining her. Now it’s kinda like she’s just another you know, whatever. Just another bad announcer that says things that makes no sense. Not quite as bad as Booker, but still she’s hammering these points home and trying to credibly call this stuff that has no credibility.”

Hopefully, Renee Young will find her footing and turn things around but it’s important to remember that what she says isn’t her fault at all. She has someone in her ear giving her lines to say and that voice might be coming from Vince McMahon himself. So she really has to say the things she’s told to say because it furthers WWE’s storyline and also makes it easier for her as well.

But when they ask Renee what her husband is thinking and she doesn’t have an answer, that doesn’t help. It also didn’t do her any favors how she kept questioning how Alexa Bliss could be an authority figure while giving a double standard example. You never know what can happen in WWE and while some people are really enjoying Renee Young in her current role, like myself, it’s hard to ignore the fact that she’s been given some pretty laughable things to say on commentary so far.