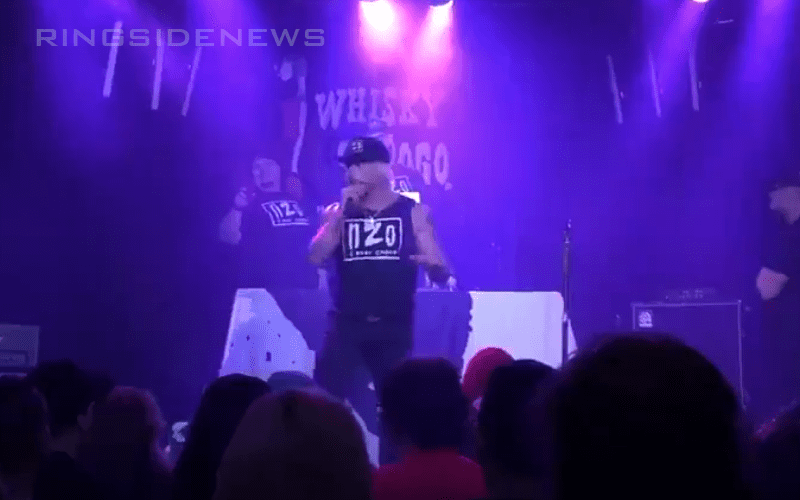 Enzo Amore had a small turnout at the Whiskey A Go Go for his big concert after his Survivor Series antics, but the crowd were all fans of Real1 and supported him in a big way. Enzo got really comfortable at the end of his show and he let some crazy things slip like the fact that he’s had to punch a bully or two in the face backstage in WWE.

After doing some wrestling moves on stage letting his fans in on the action, Real1 got very serious. Enzo said that he’s “up against a giant right now” as he continued to rail on WWE during his closing thoughts of his Whiskey A Go Go show.

“You ever hear that sh*t about me getting kicked out of a locker room, that sh*t leaks, that’s because I was the only motherf*cker who would stand up to bullies and punch somebody in the f*cking mouth and you guys didn’t hear about that! You heard what they leaked but Enzo is a Real1, dawg so I don’t hit the dirt sheets, I don’t tell people about the fights I gotta get into backstage to get what the f*ck I need to get for my family, alright?”

“You keep a small circle, you don’t let squares in it. My is the people you see on the stage. I’ve been living with my best friend since elementary school since I made it. I had the time of my life and it’s because of the fans. You all saved my job more times than you know.”

“Cause I had to go out there and fight for every word that came out of my mouth. Because the way I felt about it is if I go into a wrestling ring and I almost kill myself and break my body… if you are willing to get knocked out cold and your mother is at home crying your eyes out thinking you’re f*cking dead, why don’t you go write this sh*t and go say it your f*cking self.”

It sounds like Enzo Amore might have even more stories to tell and he’s not afraid of talking. Maybe one day he’ll reveal who he had to punch in the face for bullying him, but knowing the WWE locker room and the heat Amroe still has with them, it’s hard to tell at this point.