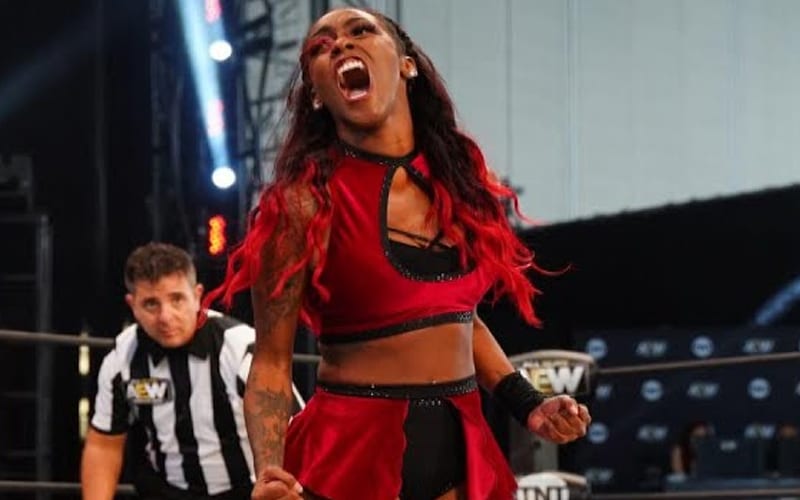 A pro wrestler’s name can come from any number of places. It can play off of a wrestler’s real name, and it can also draw from past experiences. For Red Velvet, it was a combination of a number of things.

During AEW Unrestricted, Red Velvet explained how her pro wrestling name came about. She just got out of a life changing relationship and she was getting rid of her past. Then she cut a promo for a pro wrestling show and her friends helped her concoct the perfect moniker.

“In college, I had my first life changing relationship. It put my life upside down and changed my life. It changed me as a person forever, so I went through this stage where I dyed my hair super red. I said I’m getting rid of everything in the past. I’m a new person. I had this red hair and my friends would say that was my alter ego. They were like, when Velvet switched modes, she’s like Red Violet.”

“A show came up asking for wrestlers and anyone can do it. I had to cut a promo. I went to my friend’s house and I was like, ok, I’m going to cut a promo.  I’m going to be a wrestler. He said, ‘What is your wrestling name’, and he was a huge wrestling fan. I said, ‘Red Violet.’ He said, ‘Ew, That’s not good.’ I said, ‘I have nothing. That’s like my alter ego.’ He said, ‘You’re small, petite, spicy, you’re very elegant in the way you do things. Your hair is super red. Your skin is beautiful chocolate. You remind me of a red velvet cake.’”

“I said, ‘Ok, let’s wing it. Let’s use it.’ In the beginning, it was more of a comparison of what he said I was. I started putting some thought into it and as a person and my alter ego, how am I? It kind of all flowed. My sassiness and my sweetness because I am a really sweet person, but when you piss me off, I’ll give you cavities. Then the velvet, because I used to dance, so just like the way I started to move in the ring was very fluid and very elegant. Then it started taking off.”

Red Velvet has the match of her career coming up on AEW Dynamite this week at their Crossroads special. She’s trying not to let the pressure of that huge match get to her either. We’ll have to see what’s next for Red Velvet, but that name is likely to appear on plenty more cards by the time she’s finished in the pro wrestling business.