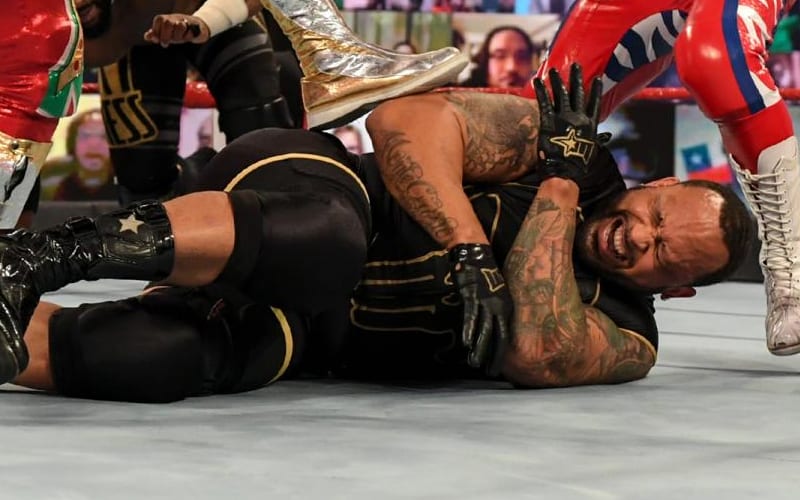 MVP has led the Hurt Business for months, but last night’s episode of RAW left him limping, and he might have suffered an injury.

During Wrestling Observer Radio, Dave Meltzer discussed a bump that MVP took during RAW this week where it appeared that he blew out his knee. This was a spot that looked pretty bad, and it appeared as though he was being helped to the back during the match.

“Did you see MVP blow out his knee? I don’t know how serious it was, he either took, I don’t think it was from this, he either took a bump off the apron and landed on his feet then he gets into the ring, it seems like he was walking in the ring and his knee just went out. It didn’t play into the match, he was limping…they were helping him to the back when the camera was off, but when the camera was on, he was trying to walk on his own and gut it out and not sell it.”

“It was very similar, remember when Kevin Nash tore his quad? Yeah, it was a very similar look, you know you just take a step and all of a sudden boom. I don’t know for sure if it was a knee, but he was limping pretty bad. He’s hurt, but I don’t know the extent of the injury. I don’t know if it’s serious or just tweaked it, but he got hurt in the latter stages of the match.”

Hopefully, MVP didn’t suffer a serious injury. This is not a good sign for him as he enters the road to WrestleMania. MVP isn’t booked for a match on the Elimination Chamber either, but we’ll have to see when he comes back. As of this writing, we have received no official word.