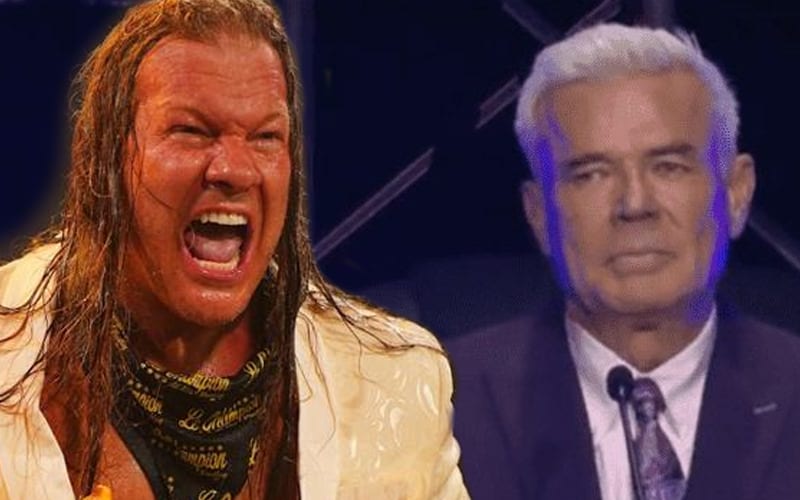 Since making its debut in 2019, AEW continues to be the definitive alternative to WWE’s product. However, it is not without its flaws.

While speaking on his 83 Weeks Podcast, Eric Bischoff talked about AEW’s product. He mentioned how in 2011, Chris Jericho criticised TNA for not doing anything different with their product.

If I was working for TNA I would project that it’s the greatest wrestling company in the world because if you’re not projecting it, why is anyone going to believe it?” Jericho said at the time. “When we were in ECW it was small, I never made more than $250 a show but you would die for that company and when you came across that way, the fans came across that way and suddenly you have this underground revolution going on and it was real, it was a revolution, people believed it was the best. No one in TNA believes they are in the best company and if they don’t believe it then why am I going to believe it as a fan? Why am I going to buy their product?

Bischoff then said that Jericho’s past comments are applicable for AEW as well because the show on average garners 800,000 viewers weekly and rarely reaches 1 million. He then noted that Chris Jericho’s words may come back to haunt him.

“I think it’s going to come back to bite him in the ass is what I think,” Bischoff said. “AEW last week they did about 800,000 viewers, they opened the door with 1.5 million viewers and haven’t been able to crack 1 million since or if they have it’s been only on 1 or 2 occasions. They’ve essentially flatlined at 7 or 800,000 viewers on average for the last year and a half.“That’s an observation that could, unless something turns around in the next 18 months, come back to haunt someone like Chris. Quite frankly, AEW has flatlined and it’s been that way essentially for a year. It’s easy to talk about a business you’re not really in. Chris has never run a wrestling business and when he made that statement, he was making it from a position of a talent not an executive.”

AEW has been criticized for other aspects by fans and wrestlers alike as well. We will have to see how the company improves their product.

Do you agree with what Eric Bischoff said? Let us know in the comments below.