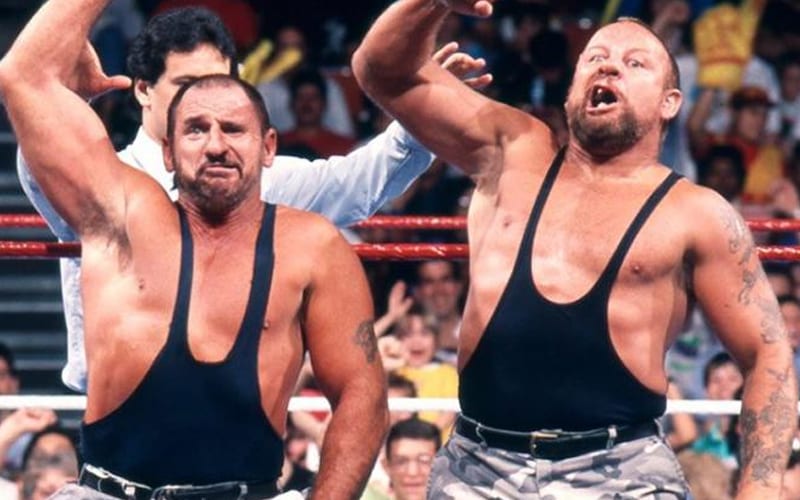 The Bushwhackers are WWE Hall of Famers, but they never captured the big titles in the company. There is a reason why every great team never wins tag team gold, and Luke and Butch are no exception.

While speaking to Wrestling Inc, The Bushwhackers opened up about why they never pulled down the WWE Tag Team Titles. They had an opportunity to win the titles from the Brainbusters, but Arn Anderson and Tully Blanchard were able to hold onto their gold.

Luke recalled that an unfortunately timed injury dashed any hope they had of pulling down WWE’s top tag team prize.

“Tully and Arn had the belts, and we were put with them. We set it, and we did a bit of an angle. Those days, on television, we had jobbers. We’re doing the battering ram on enhancement talent, and the guy’s giving up on you on the other side of the ring.”

“He puts me in a headlock, and he’s running me. My head’s supposed to hit the gentleman’s stomach. The guy freaked out and turns, and my head hit his hip. I cracked a vertebrae on my neck, hairline head fractures. I was out for 10 weeks, and Butch had to run with Tully for ten weeks till they (the titles) changed. I killed our chance for the belts there.”

“Nearly every town that we went in, once we were over, he (McMahon) would put our match on last because you always wanted to send the people home happy,” Butch noted. “The main event would be on before us, or two before us. Then we would be saved for the very last match. We would go on there with the music, and the people would go home so happy. So we did that for many years for WWE. We didn’t need a belt for that.”

The Bushwhackers picked up title belts all around the pro wrestling world, but they never reached the top of WWE’s tag team rankings. That didn’t stop them from creating a ton of memories in the process as they licked their way into WWE History.