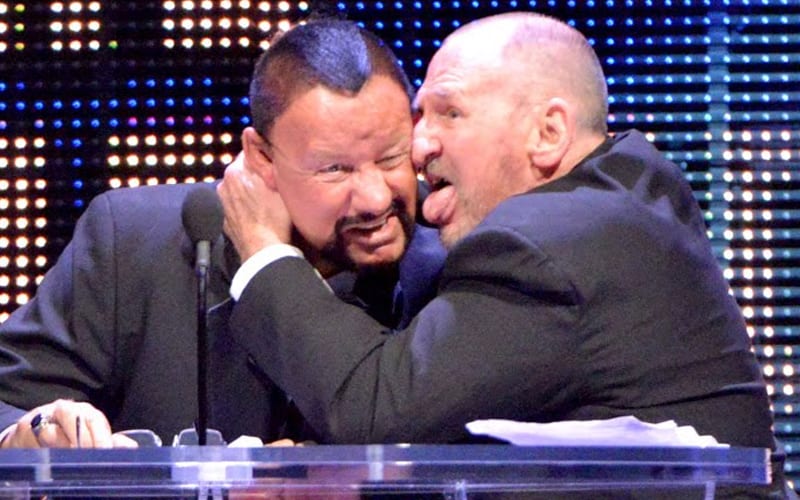 The Bushwhackers are WWE Hall of Famers. They are very unique because they are the only two WWE Hall of Famers who were known for licking their opponents, interviewers, and even each other. This was a trait that they adopted when coming to WWE.

While speaking to Wrestling Inc, The Bushwhackers were asked where the licking gimmick came from. Luke pointed out that “Butch is from down under. He always enjoyed licking down under.” This opened the door for Butch to elaborate.

“All my life, I always did things off the cuff, without even thinking really. When we go ringside messing around, sometimes I would bend down, put my head back and people would be banging on the head. When you saw it on camera, it was a good reaction, but they were beating the sh*t out of my head because they were getting carried away. That wasn’t too good for my head.”

“So I thought there’s got to be an easier way. So I grabbed this guy one time as I was going around, and I thought, sh*t, I’m going to try this. And I gave him a lick under the chin right over the forehead. Well, that got over like a million dollars. So from then on, that’s what we did, and of course, two septicemias later, and I nearly died in the waiting room on a hospital bed. I possibly wish I never did. Luke did it the right way.”

“He would put his arm on the head over his hand, but you couldn’t really see him not licking him. I started to do that at the end as well. The licking now, well, obviously, we’ll have to stop now, but the beauty of this whole thing now is we could either be The Bushwhackers or The Sheepherders. We can be anything we want. We’ll be able to show our talents off a lot better without being restricted to either being a Bushwhacker or a Sheepherder.”

The Bushwhackers never picked up the WWE World Tag Team Titles, but they did make a ton of memories in the meantime. Their licking gimmick was burned in the brains of so many fans and that helps them live on as a happy-g0-lucky babyface tag team. This was a much different demeanor from the Sheepherders that they evolved from prior to entering the company.