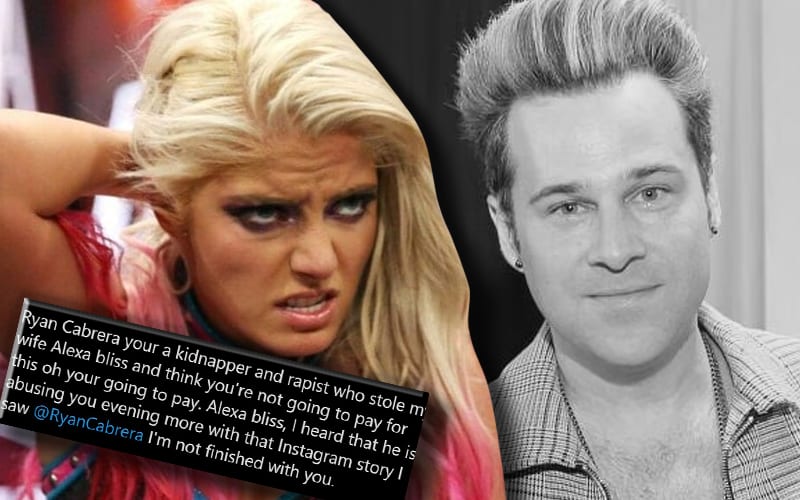 Alexa Bliss and Ryan Cabrera’s relationship was recently put on blast by a stalker who will not stop harassing Bliss online. She has threatened to get the authorities involved, but the tweets have continued.

This obsessed fan has sent out some erroneous and hurtful tweets already. He did not stop, and he has seemed to use the fan attention he has received to signal boost his deranged messages. Through it all, he claims to be married to Alexa Bliss.

To everyone who thinks they know me, you my name is not bobby it is Albert little and I’m married to Alexa bliss.

The accusations continued as he also accused Ryan Cabrera of kidnapping Bliss and stealing her. He also accused the famous singer of raping his WWE Superstar fiancé.

I read all your comments and I heard how people think I’m trolling and I’m a stalker now, I’m a lover your mad at me the person looking for his wife Alexa bliss over the guy Ryan Cabrera who kidnapped and raped her stole her from me when he didn’t even know who she was.

This obsessed fan continues firing off accusatory tweets at Ryan Cabrera over his relationship with Alexa Bliss. This is certainly a concerning situation as we have seen obsessed fans take their infatuation to dangerous levels, especially if they move into the real world and begin physically stalking. Some of the tweets seem to indicate a threat toward Ryan Cabrera’s life as well.

Hey @AlexaBliss_WWE I’m going to be here for a long time until you are back home with me and @RyanCabrera gone from our lives.