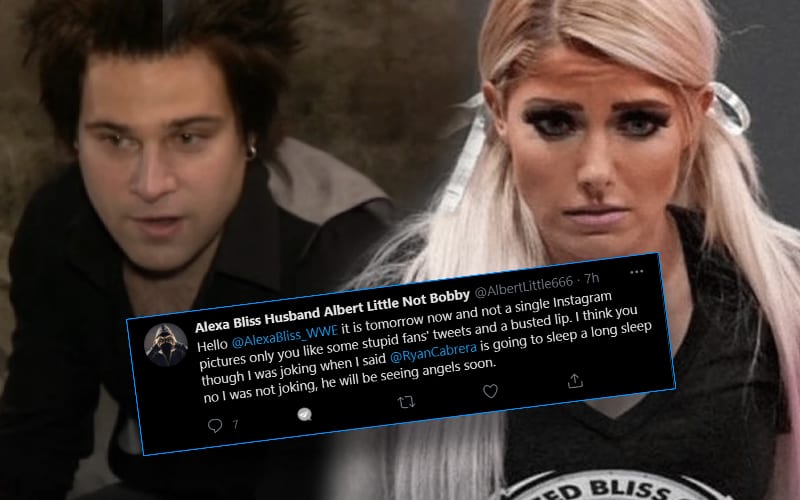 Alexa Bliss has been recently dealing with a crazed stalker who kept on sending her disturbing messages on social media. The obsessed fan had earlier harassed her fiancé Ryan Cabrera and now it seems he is at it again.

Using the Twitter account  “Albert Little 666,” the obsessed stalker sent highly disturbing tweets to Bliss. He said that he is going to stay up all night waiting for her Instagram pictures. Then added that he wants to feel her body again and called Ryan Cabrera a rapist.

Hey @AlexaBliss_WWE I’m going to stay up all night waiting for your Instagram pictures, but in the meantime, I would love to feel up your body again @RyanCabrera stop touching my wife you rapist.

The crazed fan sent out another tweet later on, where he gave another death threat to Ryan Cabrera, stating that Cabrera will be ‘seeing angels soon.’

Hello @AlexaBliss_WWE it is tomorrow now and not a single Instagram pictures only you like some stupid fans’ tweets and a busted lip. I think you though I was joking when I said @RyanCabrera is going to sleep a long sleep no I was not joking, he will be seeing angels soon.

Alexa Bliss had mentioned in the past that authorities are involved in the case. Ringside News will keep you updated on this ongoing story.