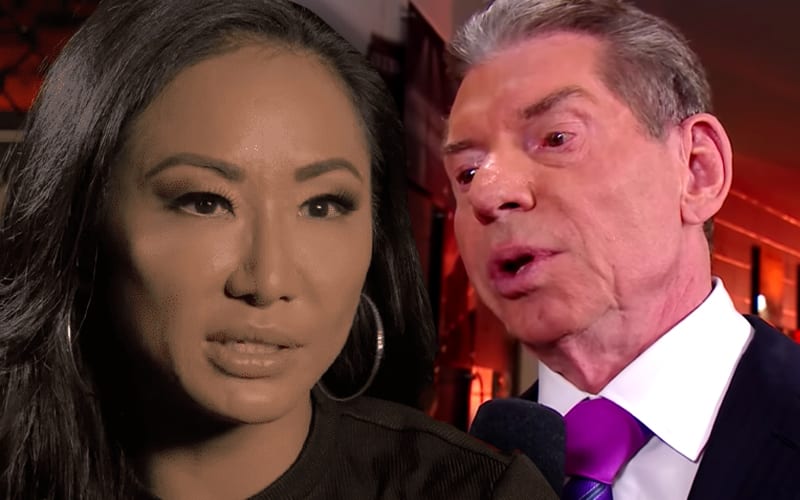 WWE is very proud of their Women’s Evolution. This is something that they continue to boast time and time again. There was a time when Divas were lucky to get five minutes on television for a match, including their introductions.

Gail Kim left WWE and she is with Impact Wrestling now. The former WWE Women’s Champion recently spoke on Wrestling with Stereotypes about how WWE treated women’s wrestling, and who is to blame.

She praised Triple H for spearheading the NXT women’s division. She also revealed a story about Triple H alluding to the fact that a focus on women’s wrestling wasn’t going to happen in WWE during her time.

“Once TNA started their women’s division, and it became a success overnight, I thought they [WWE] would follow suit pretty quickly. From my experience, I really think it was Vince suppressing it all.”

“[Triple H], with the women, was the key to bring [women’s wrestling] back. When I quit [WWE] the second time, I talked to Hunter and he understood my love for wrestling. He said to me, ‘I know you want to wrestle and I would love to go in that direction, but obviously the company…’”

“He did not say specifically who or what or why, but it was pretty much ‘it is not happening here.’ We know [Triple H] is the creator of NXT and what the successful product is today. So, I give him a lot of credit for making that happen, and the fans. They demanded it and forced fans to hear that.“

This isn’t the first time that Gail Kim expressed her frustration toward Vince McMahon. She said Mr. McMahon “literally is Satan” in the past.

Fans showed WWE that they wanted to see women’s wrestling and that brought a greater focus. The company still doesn’t pay their women nearly as much as the men, but that might be the next phase of WWE’s Women’s Evolution.