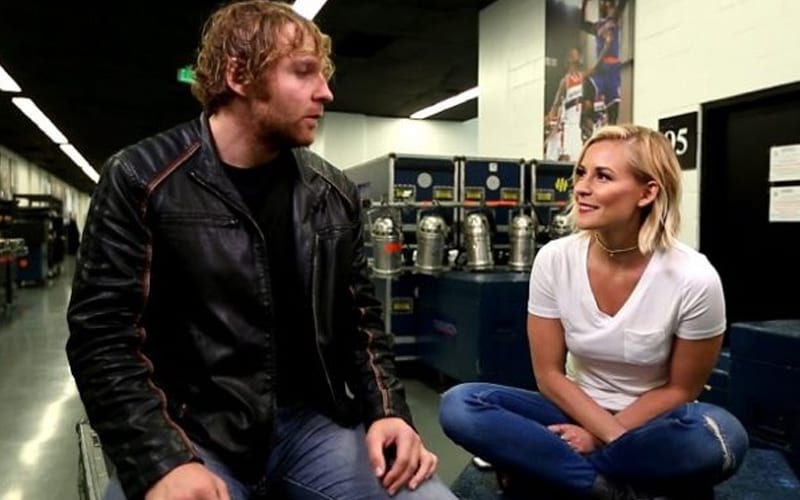 Jon Moxley was Dean Ambrose in WWE and married to Renee Young, the company’s first-ever full-time female announcer. Then Ambrose left WWE and eventually joined AEW. His wife stayed in WWE where she remained on commentary until getting a move to WWE Backstage on FS1.

Young left WWE and is Renee Paquette now. She recently sat down with Chris Van Vliet where they discussed her time in WWE. She also isn’t shutting down the idea of eventually joining AEW if the right gig comes along.

She was asked if Moxley’s WWE departure put any additional pressure on her from the company. She didn’t feel any pressure, in fact, her husband’s exit was somewhat of a blessing for her on commentary.

“Shockingly no, it didn’t [put any pressure on me]. It actually made my life easier, to be honest, in a sense, because I had just started doing commentary when he came back from injury. He came back and he was coming back as a heel character, and god, calling my husband’s matches while he’s this wacky heel was a really hard spot to be in.”

“Sometimes I would get feedback to call it like a wrestling match like you don’t know him to ‘what did you guys eat for dinner last night? What did you guys talk about at home over the weekend?’ I’m like [makes exasperated face] ‘GRAAAH.’ I had no idea how to navigate so when he left I was like, ‘at least I don’t have to deal with that anymore,, thank god.'”

It can be tricky working with someone you’re in a relationship with, especially if you’re both on worldwide television.

Jon Moxley and Renee Paquette aren’t working for the same company anymore. It is also highly unlikely that AEW would handle their real-life marriage in the same way that WWE did.