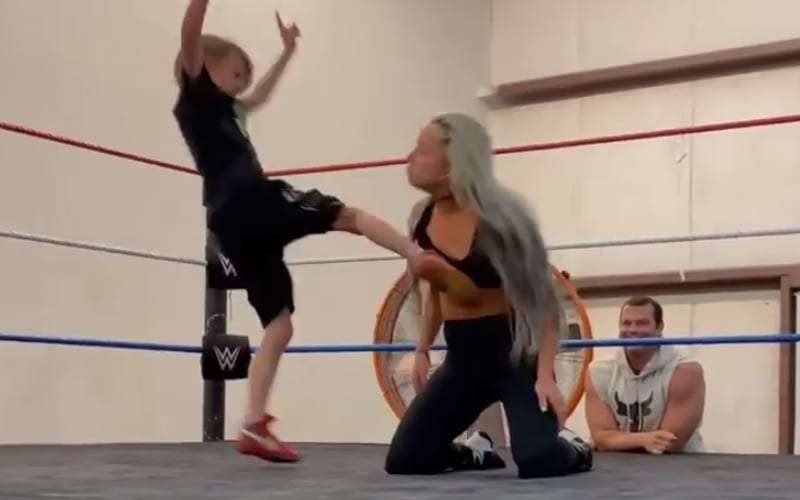 Brodie Lee Jr has already inked a deal with AEW. The 8-year-old son of Brodie Lee could decide to become a pro wrestler like his father. He is certainly getting some early training in.

We have posted several videos of Brodie Lee wrestling with AEW stars. He took out the Dark Order in the locker room with a kendo stick. He also had a chance to pin former NXT Champion Adam Cole at AEW’s New Year’s Party. Brodie Lee Jr isn’t done training yet.

Amanda Huber uploaded videos on her Instagram showing Brodie Lee Jr training with some of the best. He had TJ Wilson, Natalya, and Liv Morgan around to train him a bit. She also included a caption that talked about some of the cool things that Brodie Lee Jr has been able to do recently thanks to the outpouring of support they have received.

Tonight was pretty cool. We got to go visit @tjwilson711 & @natbynature and let Brodie work in the ring. @yaonlylivvonce is a gem for working around the ring with him and letting him learn.

He also cut promos on @allelitewrestling #aewdark which I didn’t know was going to end up making the show. I thought AEW was just letting him have some fun after a really really tough night. Having them air it was incredible and I wish you guys could have seen his smile when we watched it. I told him what @tonyrkhan said about his promo and he was BEAMING.

Also, just for clarity’s sake.
1) His contract with AEW is valid on his 18th birthday *if* he chooses to wrestle. Nobody is going to push it with him. If you were to spend 10 minutes talking to him you’d understand why they gave him a contract though.
2) School is number one for him.
3) He is not seriously training at the moment or will be taking bookings or anything ridiculous right now.

I know I shouldn’t have to clarify but with social media I end up seeing stories how he’s being forced into this or questions about his “contract” or all sorts of craziness.

At this moment, all of this wrestling around him is our friends trying to make an 8 year old pro wrestling fan feel a bit of happiness after losing his hero. 💛🖤

Brodie Lee Jr already has plenty of unsanctioned matches under his belt. We’ll have to see how long it takes him to get in a ring to compete for real.

The Huber Family went through an unimaginable tragedy when Brodie Lee passed away. The pro wrestling community has also rallied around them. You can click here to check out Brodie Lee Jr punk out Marko Stunt on AEW Dark as well.