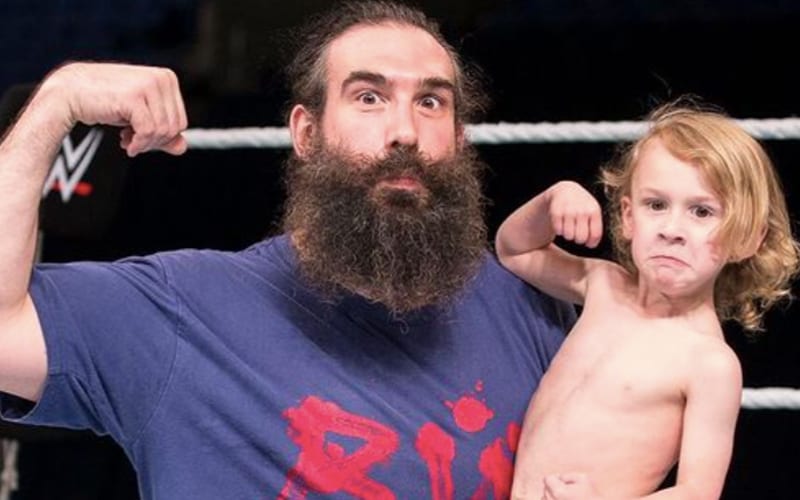 Brodie Lee loved his family, and his son Brodie Lee Jr loved watching his father wrestle. His love for the wrestling business landed the 8-year-old with a legit AEW contract, and he will be a part of the roster in about ten years.

Tony Schiavone said on What Happened When that Tony Khan signed Brodie Lee Jr to a legit contract. He will be on the AEW roster when he comes of age. Right now, he’s loving every second he can be around AEW, and everyone in the company is taking amazing care of him.

His mother Amanda also appreciates how much Brodie Lee Jr loves pro wrestling. She stayed until they’re finished taping AEW Dark which can sometimes stretch until 2 in the morning.

They had brought little Brodie to TV and wrestling is his life. He is 8 years old. He really is a great kid. They made him a member of The Dark Order. They put a mask on him. He came out with a kendo stick. He beat up a lot of people. This of course was at a TV taping with nobody in the audience. They signed him to a contract. They legitimately signed him to a contract and when he gets of age, he will be with AEW. They have taken care of him and he follows guys around all the time in the back and he becomes a part of us.”

“Amanda is back there. When we do TV tapings now, we will have a live show or a taped show, Dynamite, and then we will have sometimes 13 dark matches. We are there until 2 am sometimes. I was sitting back there with Amanda when Dark was going on and she said, ‘I’m dead tired. I need to get back and get some sleep but he (Brodie Jr) just loves this so much,

“I’m going to wait.’ So, she waits until it is all over and he gets involved with the guys and sits in the gorilla position. He sometimes comes out with a mask on and does some crazy things. It just shows you how the roster loved Brodie and how we are family… When Brodie was hired, we all said, man that’s a great hire because we knew he could work. Then when we got to know him, we thought, not only is this a great hire talent-wise, but he is a great hire because he is a great person backstage. It was a tough day when we got the news and it still is.”

AEW had Brodie Lee Jr in the ring after Dynamite’s Holiday Bash taping and Kenny Omega submitted to crown Lee Jr as the new AEW World Heavyweight Champion. Justin Roberts announced him as the new champion and everything. It wasn’t a real title change, but perhaps, someday Brodie Lee Jr will win that title for real.

Brodie Lee’s legacy will live on through all of the amazing stories about his life. His son will also apparently follow in his father’s footsteps. It might be a while until he becomes a part of the AEW roster, but Brodie Lee Jr will now have ten years to prepare for his debut.