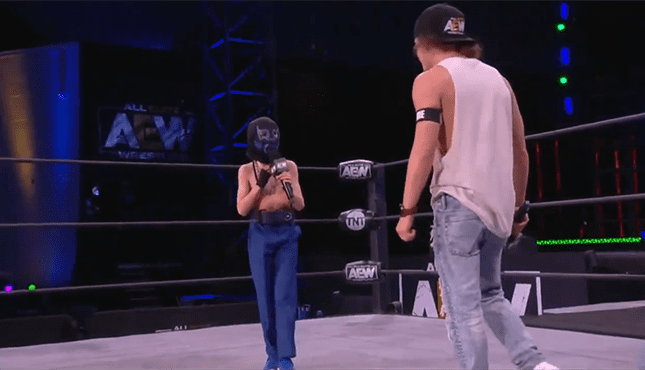 AEW has signed Brodie Lee Jr. recently and it seems he was a highlight on this week’s AEW Dark.

As seen on AEW Dark, Marko Stunt of the Jurassic Express made his way to the ring and just as he was about to speak, Brodie Lee Jr. came out and cut him off.

-1 was seen wearing his Dark Order mask as he made his way to the ring. -1 then proceeded to cut a scathing promo on Marko Stunt.

He said that Stunt only wins matches because he has larger wrestlers such as Luchasauras and Jungle Boy to help him win. Brodie Lee Jr. added that Marko Stunt isn’t capable of winning matches on his own.

After that, Brodie Lee Jr. said that he will grow up to be far taller than Marko Stunt. Then it devolved into a pushing contest before Cody Rhodes and referees came out to break the two apart.

After the segment ended, Tony Khan took to Twitter and revealed that Brodie Lee Jr. came up with that promo himself.

“Brodie wrote that promo himself. I asked him what he wanted to say about Marko, and he said all of that off the top of his head, it was incredible, I told him to please please go out and do that. -1 is really something.”

-1 certainly seems to be having a great time in the company. We will have to see what he will do next.