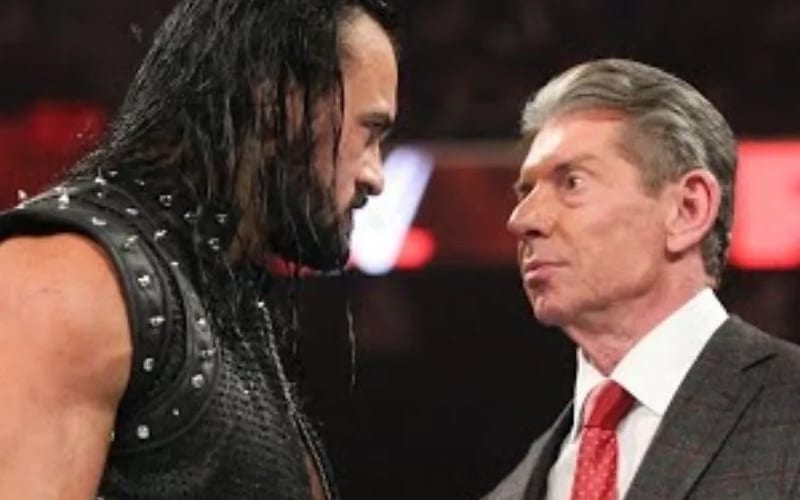 Drew McIntyre was released in WWE back in 2014 and since then he competed in various promotions all over the world and honed his in-ring skills. He eventually was signed back by WWE a few years later and made his main roster return in April 2018.

McIntyre recently spoke with ‘Stone Cold’ Steve Austin on Broken Skull Sessions. Steve Austin asked the WWE Champion about his return to the company in 2018 and whether Vince McMahon spoke to him at that time.

McIntyre revealed that he had not spoken to Vince McMahon until he returned to the squared circle. He was also very nervous about fans reacting to him returning, but McIntyre’s fears were unfounded as fans started cheering for him.

The WWE Champion also revealed that he went backstage to the Gorilla Position following his return match and hugged Vince McMahon. McIntyre then revealed what he was told by Vince McMahon.

“There was nothing said before I actually hit the ring. The first time with Dolph [Ziggler], I was underneath the ring, I came out, the same feeling under the ring ‘oh god, I hope they know what I’m all about’. I came out, I took out Titus O’Neil and Apollo and sided with Dolph and it started a ‘McIntyre’ chant I was like ‘oh, thank god they know’. I got backstage to Gorilla and gave Vince a hug and he said ‘welcome home’. And it was later on that we started having conversations.”

“It was very much about the present at that period. It was later on that we started talking about the past, reminiscing. As far as I was concerned, as far as he was concerned, at this stage when I first returned, it was about what happens from here forward, not going backward.”

Drew McIntyre successfully defended his WWE Championship against AJ Styles and The Miz at WWE TLC on Sunday.