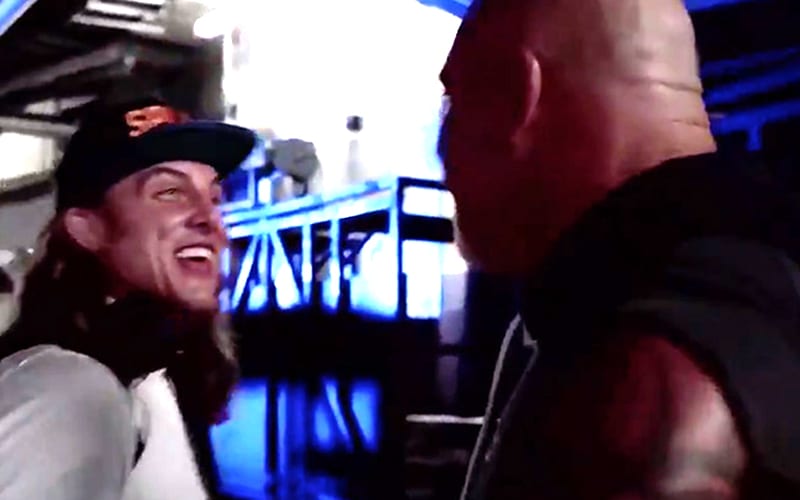 Matt Riddle and Bill Goldberg do not have the best of relationships in professional wrestling. On several occasions, the two WWE Superstars have shown their dislike for each other.

Last year Riddle criticized Goldberg for being an unsafe and dangerous worker and said that he was “the worst wrestler in the business”. Riddle has also called out the WWE Hall Of Famer in the past.

Riddle was also confronted by Goldberg backstage during SummerSlam, where he told Riddle that he was not ”his bro.” Goldberg also blocked Riddle on social media as well.

It seems the heat between the two has yet to totally diminish, but fans have been wondering if the two will ever meet inside the ring.

Riddle recently spoke to BT Sport, where he discussed a possible match against Goldberg in the future.

“We could work it out either way. I would love to have a sweet match with him. I think I’m good enough where I would do it. I think [I could] redeem him completely. I don’t have to win – I’m not that guy. I’m all about the quality of the work. If we could make quality work and if you would be willing to listen to what I have to say – and I’ll listen to what you have to say but I think it could be magical and I think the fans would eat it up and they would because the guy really doesn’t like me and I really don’t like his work to be fair. From Universal Solider 3 and beyond, not a fan. But I get it, he’s got a guy has a presence just like I have a presence.”

Riddle said that it is doubtful the two will ever clash inside the squared circle, but he will be ready for a match if Goldberg is interested.

Do you want to see Goldberg vs Riddle? Let us know in the comments below!