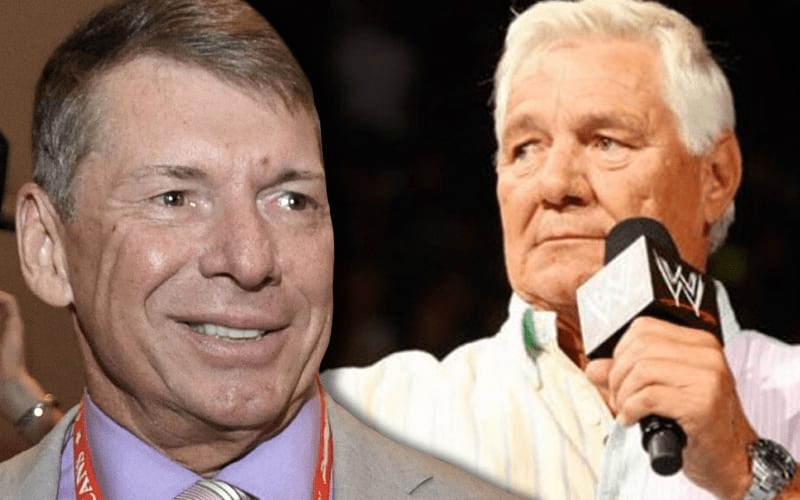 Pat Patterson passed away this week, and the entire pro wrestling world mourned the loss of a beloved icon. He was known for his personality, and brilliant mind in the pro wrestling business.

Matt McCarthy was a WWE writer from November 2011 to October 2012. He joined Wade Keller’s PW Torch podcast recently where he shared a great story about Pat Patterson that gives a bit of a better idea about the kind of life he brought to the backstage environment.

This particular production meeting, Pat [Patterson] was there and he was just coming loose at the seams that we were waiting for Vince [McMahon], and it built to the point where he was like, ‘We have to do something. We have to do something!’ At first I was like, I start pitching my — if you remember the episode of The Simpsons where Bart is like, ‘We should turn our desks around and face the other way, you know, before the teacher gets here.’ I’m like, this is happening in real life with grown men, and so Pat’s like, ‘We should turn all the lights off and when we walks in here, all the lights will be off.’ We’re like, ‘Alright, Pat wants us to turn off the lights’ so all the lights are off, and we’re sitting there, we’re waiting, we’re waiting and then somebody shows up, I forget who it was —”

“So somehow we got word, we knew Vince was in the building and he’s on his way up. So all the lights are off and we’re all sitting there with our hands folded, not talking, waiting to see what the hell is gonna happen now, and Vince comes in the room and he’s just like, ‘God damn! Get some lights on in here. What’s going on?’ So he turns on the lights and Pat’s like, ‘Ah! How you like that Vince? How you like that!? Why you here so late!?’… and Vince comes rolling up to the front of the room and he puts down his briefcase and Pat would go, ‘Vince, how would you like it if all of us showed up to the meeting three hours late? What would you do then!?’ And Vince just gets a smirk on his face and he just goes, ‘Fire the God damn room.’”

Vince McMahon can show up to meetings whenever he wants to, because it’s his company. Others don’t have that same luxury, because they would lose their jobs.

Pat Patterson wasn’t afraid to give Vince McMahon a hard time, and the two were very close. This is just one of many stories about Patterson, and it also gives a good illustration of how much he will be missed.