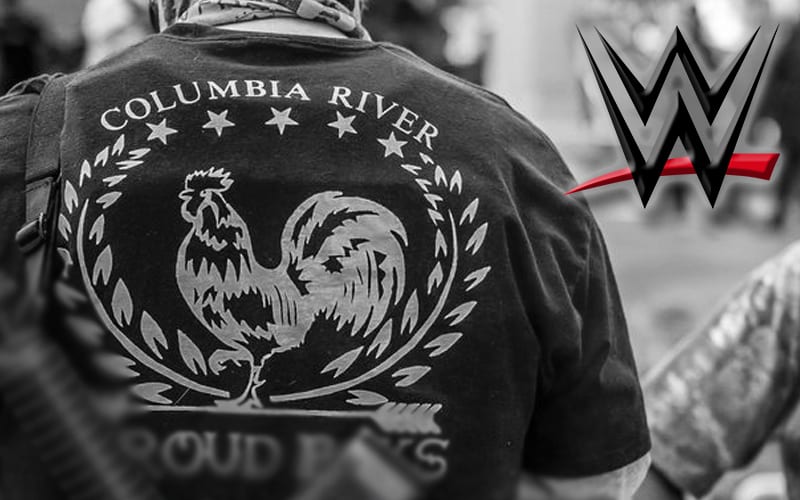 WWE referee Drake Wuertz didn’t think that anyone would track down his Parler account, but they did. David Bixenspan released several in-depth articles detailing likes and follows from Wuertz’s account which included some controversial activity. Now Wuertz is speaking out on the matter.

Drake Wuertz’s Parler account, and one ran by his wife, was found to like and share posts supporting QAnon conspiracy theories and the Proud Boys. After Wuertz’s Parler account was outed, he changed its name and wiped the follow list clean which included the Proud Boys along with several others who have been known to cultivate unfounded conspiracy theories.

The WWE referee logged onto Instagram where he released a lengthy statement on the matter. He claims that he has been “recklessly attacked” and he “will not be bullied.” He made it clear that his family are not racists, sexist, or members of any white supremacist organization.

“An irresponsible and biased “wrestling journalist” has been recklessly attacking me and my family. I will not be bullied and I will not put up with it. For some reason, he has targeted me for quite some time now. He has gone so far as to stalk my wife’s social pages and has documented every ‘like’ or ‘follow’ we’ve made in an attempt to have me “cancelled”.

He’s falsely labeling me with some of the most evil names that you could ever call someone. We are neither racists, sexist, nor members of any white supremacist organizations, conspiracy theory groups, or otherwise. This generation of “woke cancel culture” keyboard warriors thrive on trying to take out people they simply don’t agree with. These kids that were raised in social media seek nothing more than to make a name for themselves by harming others with opposing views by any means necessary. This guy first attacked me for doing a fundraiser for an organization that sponsors an Electronic Storage Detection K9 in my county’s Sheriff’s department which helps fight human trafficking and child exploitation. This organization has assisted in the rescue of over 4,200 victims and the prosecution of over 2,500 predators. Living in Orlando which has the 3rd highest rate of Human Trafficking and being a Father of 3 young children, this is a ministry near and dear to my heart that I’m heavily involved in. Why on earth would you attack someone for helping law enforcement fight child sex trafficking?

The fundraiser he mentioned has been covered in the past. Both Wuertz and former WWE Superstar Matt Morgan are supporters of Operation Underground Railroad, an organization with accused QAnon links. The article by Vice also reported that Wuertz used his WWE company email account to coordinate events.

It also seems this guy has a history of using actual hate speech, racist terms, insults to those with special needs, falsely accusing people in our business and other questionable behavior online.

I could post screen grabs of these incidents but that’s not how I choose to fight this battle.

Knowing this is in his heart, I will continue to pray for him despite what he’s attempted to do to my family.

Sadly, social media has become quite toxic and has gotten to the point where the negative outweighs the positive. Simply ‘liking’ or ‘following’ a post can result in doxxing from these trolls… they come after your job, your faith, and make harmful threats against your family. When did we start auditing who people follow and using that to attack their livelihood?

The threats against my wife and kids are disgusting and It’s disheartening to see how low people will go. These people will stop at nothing to attack and do harm. I’m not a big star with a lot of power… I’m a referee in developmental. They are threatening to come after me thinking I’m an “easy target” but I will not be intimidated.

Above everything I’m a disciple of Jesus Christ…a child of the most high. We’re covered by the Grace and Armor of God (Psalm 91). We may be saved but we are not soft. The Bible warns us that we will insulted because we follow Him. I consider it pure joy and anxiously await the crown of life for which the Lord has promised”

Wuertz has received far more attention at this point due to his political stance over his work as a WWE referee. Sometimes it’s hard to keep politics out of pro wrestling, and in this instance it seems that task is even more difficult.

We can’t condone threats toward anyone over their political beliefs. Drake Wuertz is denying any racist affiliations while blaming “this generation of ‘woke cancel culture’ keyboard warriors thrive on trying to take out people they simply don’t agree with.”

We will continue monitoring this ongoing situation. You can find his entire post below.