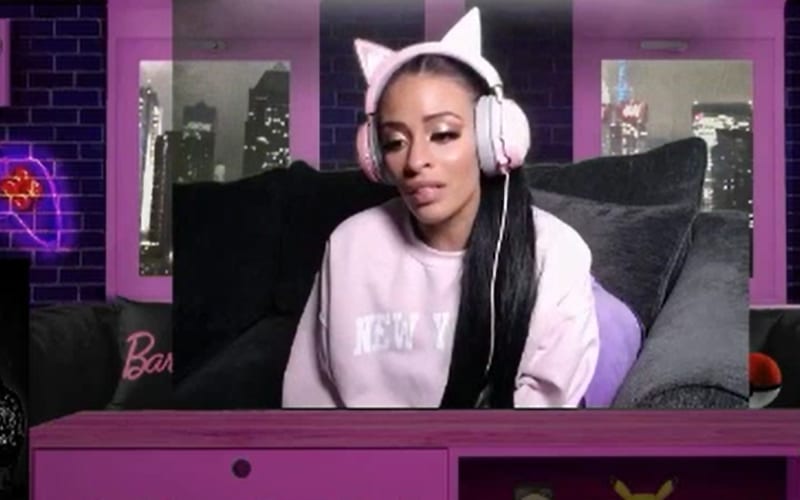 WWE released Zelina Vega from her contract on Friday, and the pro wrestling world took notice. She was quick to let fans know that they can find her on Twitch, a third party that WWE banned.

Vega jumped on Twitch following her WWE release, and she addressed the elephant in the room. Zelina Vega thanked everyone who believed in her, and she isn’t mad at anyone. She is heartbroken, and the former WWE Superstar got pretty emotional as she opened up about her release.

“I don’t know how to start this at al. I wouldn’t have the success that I have if it wasn’t for you guys, if it wasn’t for WWE. If it wasn’t for the people that believed in me from the start like Tommy Dreamer, The Rock, Triple H, and Stephanie McMahon. Tommy and Dwayne when nobody else did, they fought for me and I had gotten so many no’s in my life. Thanks to Andrade as well … Norman Smiley, Terry Taylor, everybody.”

“All I wanted since I was four-years-old was to be a WWE superstar, not just for me but for my dad too. I’ve kept [my dad’s wrestling trophy] since he wanted to be a WWE Superstar as well and obviously he couldn’t. When he passed away on 9/11, I made a decision to do it for me but for him too. Thanks to WWE, I was able to do it. For my match with Asuka, I had his name [on my gear].”

“I’m not mad at anyone. I’m not saying anything bad. I’m thankful. This is all I wanted to do … I’m sad. I’m completely heartbroken. Obviously, this isn’t the last you will see of me. I love you all and I’m thankful for every single one of you. If I go down as someone that stood up for themselves, so be it.”

Zelina Vega will remain under a non-compete clause for 90 days. She could have interest from other companies, but right now she is dealing with the aftershock of losing her job with World Wrestling Entertainment.

Andrew Yang, the former Presidential candidate who many believe Vega and others have spoken to, tweeted out that he hasn’t forgotten about Vince McMahon.