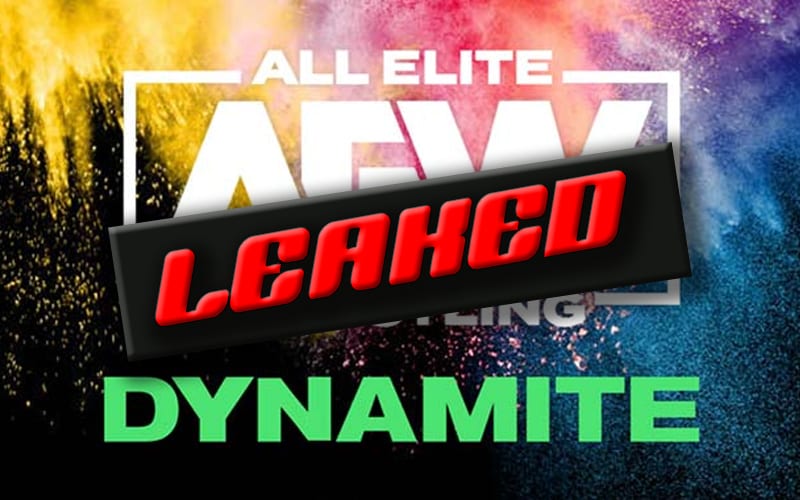 Update: Tony Khan responded to our article and cleared up this situation. What you’re about to read is a spoiler, but it’s not for AEW Dynamite. Instead, this was shot for AEW Dark.

Original: AEW Dynamite will be live next week, but one plan for the show seems to have leaked early.

Reddit user SpaceForce1 has been on the money several times before. This mystery Reddit user was the first to report Abadon’s injury, and many other spoilers. This Redditor is back, and they have a big spoiler for next week.

AEW doesn’t have a recurring talk show segment yet, but that will likely change next week. Britt Baker is set to host her own talk show segment, and since she is a dentist they will soon debut her Waiting Room.

The first episode features her SCORCHING other talent before introducing her guests, Jack Evans and Angelico. She takes a shot at Aubrey Edwards about AEW Gaming, then mocks Eddie Kingston for styling his eyebrows and calls him “The Green Power Ranger” because of his outfit at Full Gear. She says the Bucks stole the titles from FTR. She says Cody doesn’t have to worry about losing the TNT title because they’ll just design another new one for him, and that maybe it’ll be called the Cartoon Network Title. She then pranks the audience by faking an Oprah “look under your seats” giveaway.

Evans and Angelico come out and go straight in on the tag champs. Angelico says the Bucks are turning the tag division into their own vanity project. They complain about being held back and getting less time on Dynamite than Brandi Rhodes and Brian Pillman Jr. They say they’re tired of being shelved by the political process of AEW. They say they’re going to climb to the top, and they’re starting with Kazarian and Daniels as their first victims on the path toward beating the Bucks for the titles.

The Evans and Angelico stuff was pretty wooden and normal, but Britt went in.

Considering the source of this leak, those plans are likely to happen. We’ll have to see if Britt Baker’s Waiting Room segment continues after next week. AEW pegged Britt Baker to be the face of their women’s division prior to her heel turn. They certainly figured out many ways to utilize her talents, and they are apparently adding host to her resume next week.