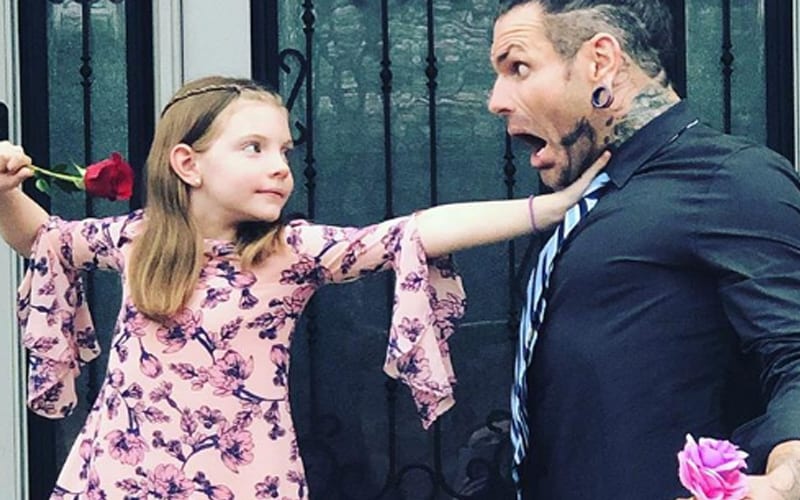 Jeff Hardy is a veteran WWE Superstar who has accomplished a lot in the ring. If he has his way, the Hardy name will continue in pro wrestling for decades to come.

While speaking with Sports Illustrated, Jeff Hardy was asked if his daughters have an interest in what he does for a living. Hardy revealed that his oldest daughter is interested in WWE, and he would love to train his children to wrestle.

He has two daughters, Ruby and Nera. Jeff Hardy would love to help train them both and watch them perform at WrestleMania 60.

“If there are ever human beings on planet Earth that I would ever train in wrestling, it will be my two daughters if they ever show interest when they’re older. Before the women’s tag-team titles were a thing, I remember thinking, ‘We should have a women’s tag division. The women would kill it if they got that shot.’ The women are incredible, and I’m so happy there are women’s tag-team champions now, too.”

“My 10-year-old understands what I do, and she actually shows a lot of interest in it, too. When would they be at WrestleMania? WrestleMania 60? Hopefully, COVID will be obsolete by then. No matter what they’ll do, they know how to keep me on my toes.”

Jeff’s brother Matt has three sons, so they might arrange an entire Hardy faction decades down the line. There are a lot of possibilities, and all of their children might not want to become pro wrestlers like their parents. The opportunity certainly seems like a viable option at this point.