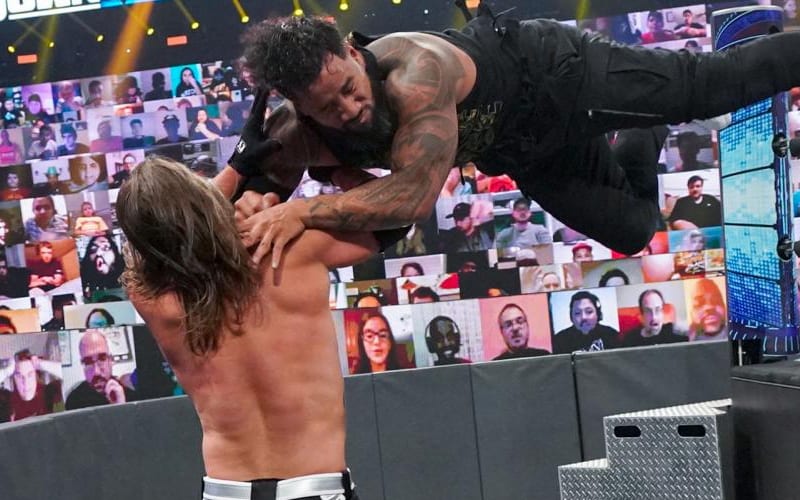 AJ Styles lost a match to Jey Uso last week on Friday Night SmackDown. Uso is in line for his second Universal Title match, and he needed a big win. Some also saw this as a way to prepare Styles for a move over to RAW in the WWE Draft.

During his recent Twitch stream, AJ Styles explained why he took the loss to Jey Uso. He explained that a story needed to be told and there’s no reason to be mad at Jey Uso for beating him.

Styles has been in the pro wrestling business for long enough that he knows that sometimes you have to take a loss and put someone over. He’s not above taking a loss when he needs to.

“Listen, there’s a story that needs to be told here. That story is that Jey Uso is not to be played with. Don’t make this guy mad. He can go. He can really go. There’s no doubt about that. It’s a business and this is entertainment. I’m not about getting myself over every time. What good is it for me to get over if the company doesn’t benefit from it? Then nobody wins.”

“I’m not old school. I guess I’m old school when it comes to the ring mentality of getting in there and getting roughed up – take the damage to your body because that’s just the way it’s gotta be and keep moving forward. That’s the old school part of me. The other part of being selfish and stabbing people in the back – it used to be like that in this business, but it’s not like that now.”

“You may have one or two guys that are very focused on themselves. Most of the new guys that came up with myself who have always tried to help each other out to have a great match – if we can have a great match and tell a great story, then everybody benefits. It won’t just be one person that benefits and becomes a star. Everyone benefits because everybody’s watching this.”

We’ll have to see how things pan out when the 2020 WWE Draft is over. This is an interesting time for WWE’s booking as they plan for a future that is unclear for fans. Even if Styles doesn’t leave SmackDown, he was able to put over Jey Uso during a time when he needed a big win.