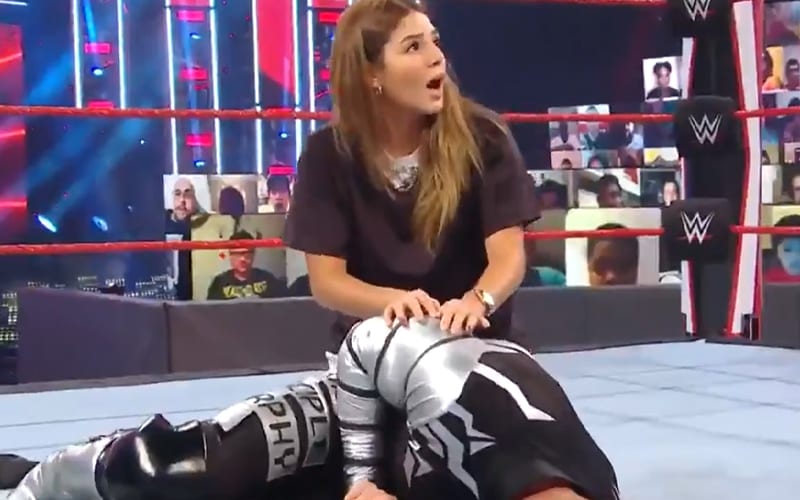 Rey Mysterio’s daughter Aalyah and Murphy have something going on in WWE. Raw featured their story for the past few weeks which was picked up in a big way with leaked DMs thanks to Seth Rollins.

During Raw this week, Murphy said he wanted Rollins to apologize to Aalyah before he will tag with him again. Rollins fired back at Murphy and said that he could have revealed all of the DMs with Aalyah about how she “really feels about her family.” This apparently included how she feels Dominik is the “chosen one.”

Rollins made it very clear that he’s the Messiah and Murphy is just his disciple. Then Rollins gave Murphy until 10 PM to apologize.

When the time came to apologize, Murphy came out to face Seth Rollins. Murphy wouldn’t apologize. Rollins grabbed Murphy’s beard and screamed in his face. Finally, Murphy tackled Rollins and they brawled outside.

Murphy took the fight to Rollins and then Seth returned fire as they brawled around the ThunderDome. Rollins grabbed a kendo stick, but he missed. Murphy grabbed the kendo stick and started teeing off on Rollins. Finally, Rollins apologized to Murphy, but he made Seth apologize to Aalyah instead.

Murphy dropped the kendo stick and Rollins attacked him. Rollins put his thumbs in Murphy’s eyes and destroyed the kendo stick over him. Then Seth Rollins grabbed a steel chair from ringside, but Aalyah Mysterio ran down to cover Murphy.

Rollins left and Dominik came down to escort his sister away. Then Rey Mysterio and his wife went to the ring as well. Rey and Dominik led Aalyah off while trying to talk some sense into her. That was where they left things this week.