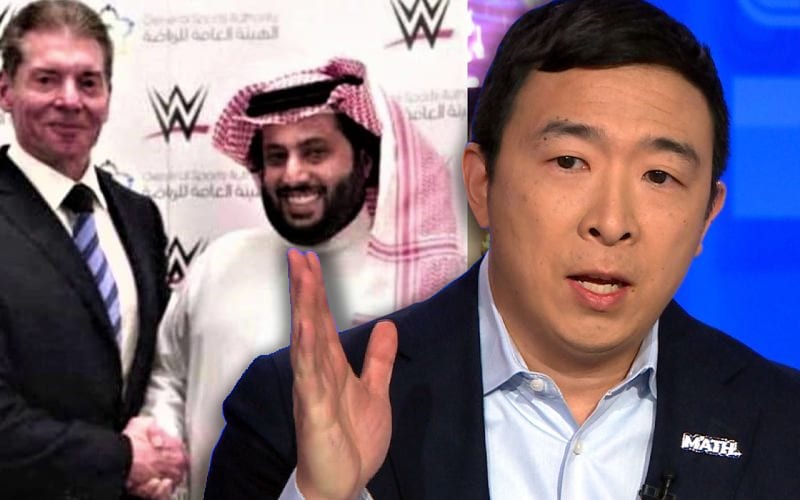 Andrew Yang has his eye on WWE, and not for a good reason. The former Presidential Candidate has previously stated that Vince McMahon better hope Trump wins because if Yang is appointed Secretary of Labor, then WWE is getting a spotlight they don’t want.

While speaking to Wrestling Inc, Andrew Yang brought up the Saudi Arabia deal that Vince McMahon’s company inked. That enormous ten-year contract saw a lot of controversy when Superstars were unable to leave the country.

Andrew Yang said that he wouldn’t have dealt with Saudi Arabia in the first place. Then he turned his focus to the Crown Jewel controversy and said there are many unanswered questions.

“Well clearly they’re dealing with people who’ve done unspeakable, despicable things, and this is something that many American companies have had to navigate where if a foreign government does something reprehensible, what does that mean for your dealings with that government?,” Yang said. “That’s something that every company and every leadership team has to to determine for themselves, but certainly, if I were in charge of WWE, I would not have been anywhere near taking money from the the Saudis given their literal dismemberment of a journalist for political reasons.”

“Yeah that there was a mystery [at Crown Jewel], and certainly there are a lot of unanswered questions associated with a lot of things that were coming out of that trip,” Yang noted. “And to me, unfortunately our visibility into some of the happenings in Saudi Arabia isn’t what we hoped it would be.”

WWE Superstars were told that it was a mechanical error. There was also a story saying that the staff of WWE’s chartered flight had to clock out and sleep. Another story says that the Saudi Prince held up Vince McMahon’s Superstars in retaliation after WWE’s feed of the event was cut for the country.

Perhaps if Andrew Yang is put in any position of power he can get to the bottom of it.