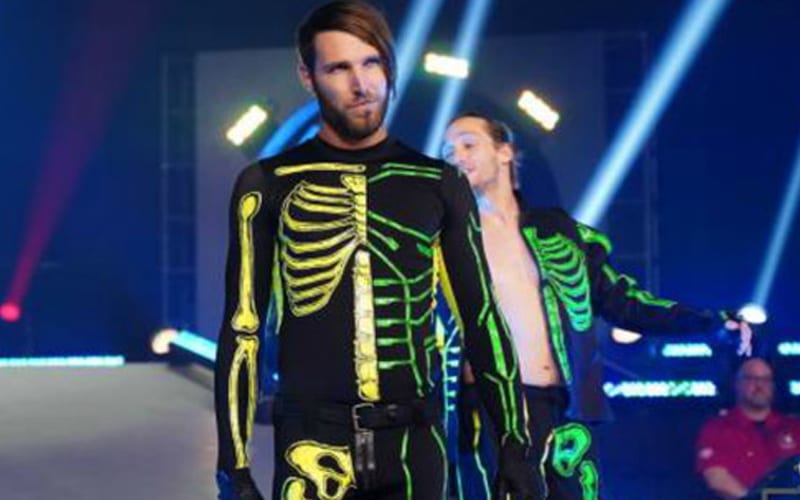 Jack Evans and Angelico are The Hybrid 2, and they are still finding their spotlight in AEW. The team also hit a massive roadblock for a while when the COVID-19 pandemic kept them from making the shows because they couldn’t cross the border.

Evans fired back at a fan who said that AEW is treating The Hybrid 2 like crap. He sent out a multi-tweet reply backing AEW’s booking decisions up. He explained how loaded the roster is and how they have a plan to build something greater, but it takes time.

I keep seeing stuff like this and honestly, we haven’t. There is 2 hours to fill and they don’t want to have 2-3 minute matches just to stick more people on TV, so there is going to be some downtime as new people are rotated into angles.

On top of this there are little things the fans aren’t privy too, for instance my ring cardio was at such a low point (I have improved it 200% now) that in my match with Kenny we had to cut a good 5 minutes out because I was done, or other little things.

For instance, to the annoyance of @AngelicoAAA I have been pulling schitz styles on everything from in-ring character, gear and all the way to if we need to do more or less “cool moves” as a heel team. Finally on-top of it all

On top of it all, and someone needs to formulate a way to teach this in wrestling schools, we straight suck at pitching angles. This is an email to the bookers. “So like, give me a mic and I talk some shit, and then like we fight and stuff.”

which when you have a booking crew that is already over-loaded, they want something a bit more concrete than that. So there is much more that goes into who gets a push and who doesn’t than people think. and

and when you have limited TV time, and everyone wants it, you have to be sure that whoever you are giving that TV time/push to, that they are ready to go on all cylinders, and up until recently, we haven’t been. Or at least me. Angelico has been pulling his hair out waiting.

AEW receives criticism from fans, but pro wrestling fans are incredibly critical at times. A team like The Hybrid 2 should never be written off, and the company is not treating them like crap at all.

AEW is providing Evans and Angelico with and opportunity, and they will continue to make the most out of every moment they have inside the ring.