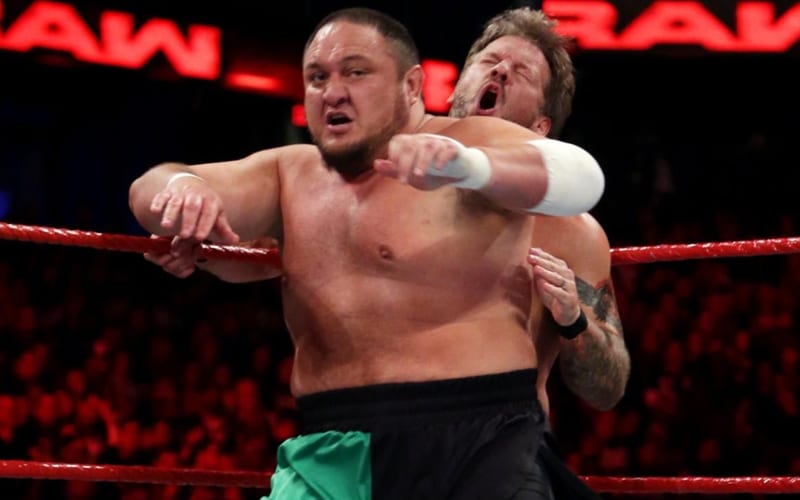 Samoa Joe is currently on the RAW commentary team. It’s unknown if he is physically cleared to compete, but he’s seemingly not leaving the commentary desk any time soon.

WWE gave Joe small bursts of a push in the past, but nothing stable enough where he reached that next level. Despite never holding a top title in WWE, most fans still consider Joe a main event Superstar. Chris Jericho obviously sees big potential for Joe as well.

While speaking on his Saturday Night Special, Chris Jericho was asked about which WWE Superstars he would like to see in AEW. His answer included Samoa Joe, but he is uncertain of Joe’s current physical restrictions.

“So would I. I don’t know if Joe is hurt right now or if he’s not feeling good, but I’ll tell you what man, he is just an amazing wrestler. He’s a great talker and just a hell of a guy as well, I would love to have him in AEW.”

I don’t know if he wants to go. He might be hurt and he’s a great commentator so if he’s going to come to AEW and steal my possible commentating job then forget that.”

Samoa Joe is great on commentary, but that is just one of his many abilities. He is also an exceptional performer in the ring, and incredibly valuable in that role.

Chris Jericho is down for Samoa Joe coming to AEW to wrestle. He can keep his commentary talents with WWE. Le Champion doesn’t need that kind of competition when it comes to being the best guest commentator on the roster.