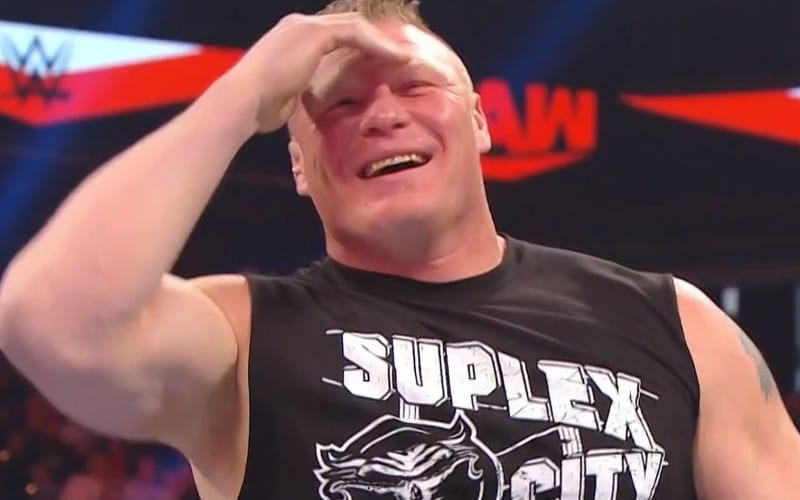 Brock Lesnar is usually very serious, especially on camera. He only really lets out a slight grin when he’s destroying someone’s body in the ring. He laughed a bit at R-Truth, and that was a huge challenge that Truth was willing to take on.

While he spoke with TalkSport, R-Truth revealed that his popular segment with Brock Lesnar prior to the Royal Rumble was not only spur-of-the-moment, but it was also part of a bet.

Paul Heyman pulled R-Truth into the Gorilla Position and informed him that he was part of a bet to make Lesnar laugh. He instructed Truth not to tell Brock Lesnar about it, but there was a bet going that Lesnar wouldn’t laugh on screen. He didn’t reveal what the winning party of the bet received, but we’re betting it was a valuable prize.

“I remember Heyman called me to the Gorilla [Position], and this is like 20 minutes before we had to go out. I had no promo, they didn’t give me nothing, and I’m like, ‘What am I supposed to say?’ Paul was like, ‘Well, we have a bet going on. We don’t want Brock to know what you’re going to say. We want you to make Brock laugh.’ I said, ‘huh?'”

“‘Truth, you’re a funny guy and we have a bet you can’t make Brock laugh. I think you can, but they think you can’t. So, just wing it.’ … Once Brock came in, I’m like, ‘Damn, I think we should tell Brock what I’m going to say.’ You know? It’s Brock Lesnar! We should tell Brock what we’re going to say. I don’t want him to be surprised by anything. Paul’s like, ‘This is going to be great.'”

“I remember the moment in the ring and I’m going on, and on, and making stuff up in my head. I saw when Brock looked at me — as in that look of ‘What the hell is he talking about?’ Because I’m just babbling! I knew I had him then. I did all I could to hold myself from laughing when I saw Brock bust out laughing because of Paul Heyman’s facial expressions. The magic just kept going on, man.”

“After that segment is over we’re in the back and Brock was laughing, he said, ‘Bro, we got to do something together. There’s something there. I don’t know what it is, but there’s something there.’ We left it there, but I know we can always pick it up. That was one of the highest moments of my career, right there. … To have Brock Lesnar say ‘we gotta do something’ it was very appreciated, for myself, to my ego, and to my time spent in the business. Brock pretty much — he gave it a hug.”

It took a lot of work, but WWE was able to catch a corpsing Beast Incarnate on camera. Lesnar really broke character on screen, but he was able to pull it together and finish the segment. R-Truth won the bet, but he was still taken to Suplex City for his efforts.

You can check out a clip below so you can have a new appreciation for what was really going on in this situation.