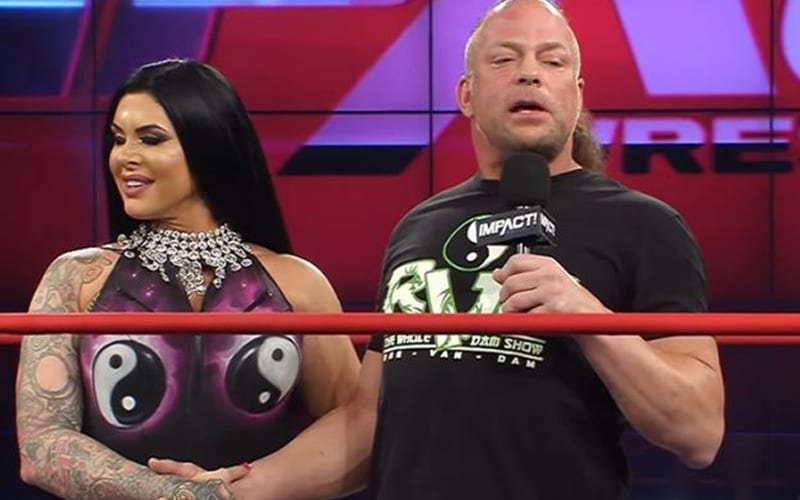 RVD signed a good deal with Impact Wrestling, and he’s very happy there. He created a lot of attention with a NSFW segment that got the company kicked off Twitch for a bit. With Katie Forbes by his side, he plans to continue making noise for himself.

Impact Wrestling seems to be a good home for RVD at this state in his career. He previously revealed that he makes way more money now than he did back in the day. All of those things keep RVD very happy with his current position.

While speaking to Wrestling Inc, RVD revealed that he’s not thinking about changing his location any time soon. He obviously can’t predict the future, but he realizes his worth. If his relationship with Impact Wrestling ends it won’t destroy his life, but he did note that he is one of the most expensive paychecks that Impact Wrestling is currently cutting. He is also confident in his abilities no matter how they want to use him.

“Not thinking about changing spaces and I have no idea if I’m going to be with them for a while. I don’t look that far ahead, so I can say for the foreseeable future, that I’ll be with them. I don’t have any plans of leaving. Having said that, if the relationship ends, then I also won’t be like shot. It always throws me for a loop when they’re surprised that people you let go or fired. ‘Oh my God, I can’t believe so and so.’ I’m like, I believe it. I’ve been the business 30 years. It happens, although I’ve never gotten fired in my life, but I am one of if not the most expensive guy in the dressing room. When they use me, they don’t even have me and Katie [Forbes] on the entrance. She noticed on the intro.”

“So when I watch stuff like that, it’s like, I don’t know some of these decisions. I don’t know if they are trying to get a rub off me and and then handle on their own or whatever, but I’m easygoing with whatever their plans are. So the good thing about all that is not really having any emotional investment in too much. In other words not giving a bleep. There’s a book I recommend ‘The Simple Art of Not Giving a Bleep.’ I recommend it. It’s an audio book on YouTube too, and I listen to it. I’m like dude, this is such a good way to explain to people like quit stressing out. You have so many f’s you can give. You got to be choosy about where you give them. Don’t care about everything.”

RVD is a name that many pro wrestling fans remember. It’s interesting that Impact Wrestling doesn’t use him more, but they also have a roster of stars to push as well.

Impact Wrestling and RVD’s current relationship will continue until either side decides it is no longer beneficial. Until that day happens RVD is going to keep doing as he is asked, but he’s not emotionally invested enough for it to really get to him.