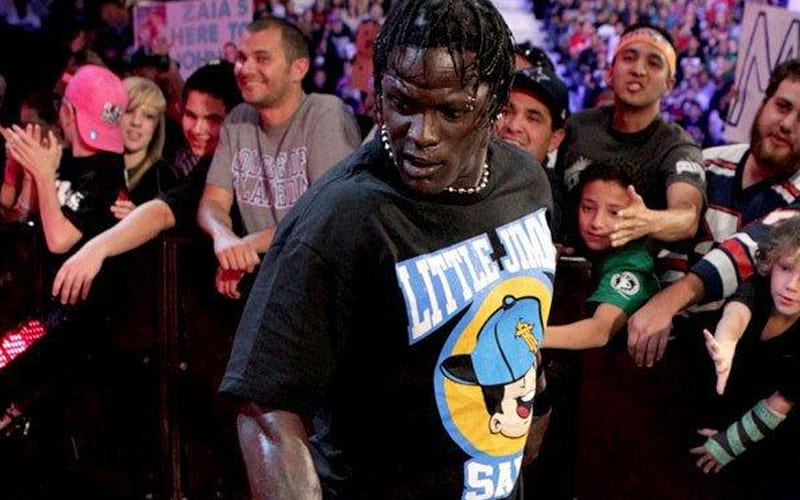 R-Truth has thrown Dance Breaks, chased titles, and took part in many other memorable moments during his time with WWE. He also had an imaginary child pal around with him for a while named Little Jimmy. It turns out that Little Jimmy’s story after WWE isn’t so bright.

While speaking to WWE The Bump, R-Truth was asked about Little Jimmy. He had bad news to report because Little Jimmy is incarcerated.

Truth revealed that Little Jimmy is in a juvenile detention camp. He didn’t reveal what Little Jimmy did to get locked up. They’re currently getting money together for his legal expenses and plan to get him back on the right path.

“It’s embarrassing, you know man. Cause he done got locked up in juvenile camp. So it’s like we taking up money now to get him out. Bro, he just went down the wrong path by kids and a lot of them get peer pressured by a lot of different stuff and different people and stuff around him and things like that. He just got peer pressured and influenced by the wrong things, man. We gonna get him out and get him back the right way, you know what I’m saying? Get him back to the light. Some people need a lot of guidance, man, you know what I’m saying?

Hopefully, R-Truth can get Little Jimmy out of juvy and back on the right path. He is an inspiration for millions, but his imaginary friend ended up falling into a bad group of people in the process.

We will keep you posted in case someone opens up a GoFundMe for Little Jimmy’s legal team.