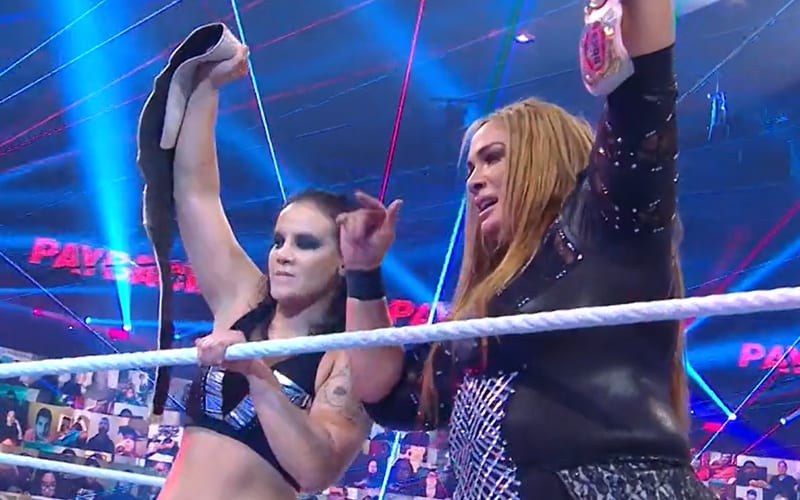 Shayna Baszler and Nia Jax were not friends when they won the WWE Women’s Tag Team Titles. That makes the story so much more interesting. They are both forces to be reckoned with in the ring, and now they are holding gold.

Baszler and Jax wasn’t supposed to be the team facing the Golden Role Models at Payback. Shayna Baszler was originally supposed to team with Asuka. It’s unclear if the result would have been the same, but Asuka could have become Asuka Two Belts.

While speaking to WWE The Bump, Shayna Baszler addressed her team with Nia Jax. They’re not friends, but they don’t need to be. The two will created a path of bodies behind them as she christened this time the “Shayna & Nia Era.”

“I think that as long as she keeps her end of the deal, I mean who could stop us? We’re both — and I say this with great dislike for her as a person as a whoever in the locker room — like we’re not helping each other out. We’re not getting each other’s bag and like we’re not doing any of that crap, but when we get in the ring each one of us singularly is pretty hard to deal with for everybody in that locker room.”

“So I think you’re going to be really hard-pressed to find a team that can do what needs to be done. It’s next to impossible. So, I think you’re gonna see a long, long reign and these titles are gonna be looked at as… this time, this era, this Nia and Shayna era of Women’s Tag Team wrestling it’s and era, it’s the Shayna & Nia Era.”

We’ll have to see what pro wrestling historians call this era in the years to come. There area lot of things that define pro wrestling’s current situation. WWE’s new Women’s Tag Team Champions are two incredibly tough opponents on their own. We’ll just have to see what happens from this point on.