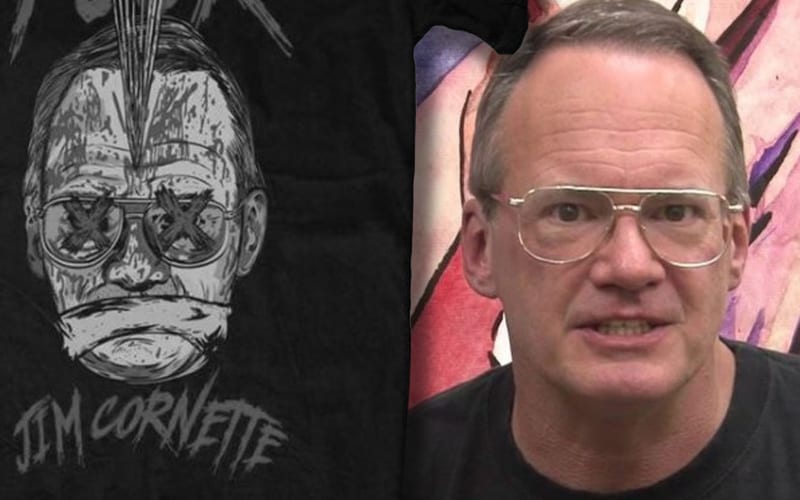 An indie wrestler named G-Raver started selling shirts with Cornette’s face on it. This came after Cornette bashed the death match wrestler. Those shirts sold very well, and then a second “Clownette” shirt was sold.

The court ruled last month that the t-shirt is okay to sell. G-Raver was making a commentary on Cornette’s critique of his art form. It was stated that “parodies are a valuable means of expression.”

Thanks to Alexandra J. Roberts, we have a full description of this case and the verdict.

the decision in the @TheJimCornette v. @StaySickGRAVER trademark & right of publicity lawsuit came out last month and it is a treat. big thanks to @ericgoldman for sending it my way. here’s one of the shirts at issue

g-raver is a deathmatch wrestler; he wrestles others w/ “improvised weapons, e.g. light tubes, barbed wire, thumbtacks, panes of glass, & weed whackers…graver’s signature weapons are tattoo needles.” he did not bring any of those items to court to defend this suit afaik tho.

cornette is a wrestling commentator w/ 2 popular podcasts. the court calls him a “celebrity” w/ a “professional persona.” cases about the wrestling world are always fascinating b/c the parties are not exactly people but not purely fictional characters (see hulk hogan).

cornette often comments on wrestlers doing stupid things. g-raver, being a deathmatch wrestler, does stupid things. in one match he lacerated his arm & could’ve died; cornette tweeted “if fans were lucky…everyone could watch [g-raver] bleed out.” twitter altercation followed.

after the initial dispute, “cornette dubbed graver ‘grover’—a reference to the sesame street character—created a thumbnail of graver as grover for his podcast videos, & used the thumbnail for an animated game of whack-a-mole.” are you not entertained?

there’s a 2nd shirt, called “clownette.” a g-raver compatriot also registered the domain name http://f*ckjimcornette.com & another filed an application to register FUCK JIM CORNETTE as a trademark for clothing.

meanwhile cornette started selling a copy of the shirt itself, on the theory that if anyone were going to benefit from his name image & likeness, it should be him. 32 other websites also sold knockoffs or other versions.

cornette sues g-raver & some other players for federal trademark infringement, dilution, & cybersquatting, & violation of his right of publicity under pennsylvania law. he does not succeed.

the court says the t-shirts aren’t commerce but speech: “g-raver sold the shirts…to critique cornette’s views on deathmatch wrestling through parody; 1a protects this expression…b/c parodies are a valuable means of expression to weaken the ideas the celebrity espouses.”

on top of that, the shirts don’t create a likelihood of confusion. & cornette’s name may possess the distinctiveness that would make it a trademark. it’s certainly not a famous one capable of dilution. even if it were a mark, defendants’ uses aren’t similar.

the right of publicity claim also fails. there are exceptions to the PA statute’s coverage, “even when the use is facially for a commercial or advertising purpose; the relevant exception here is…the shirts are expressive works & the use is through a communications medium.”

one last point: i cannot figure out why the opinion says “TUCK jim cornette” in 3 places. as far as i can tell, the shirts use the actual f-bomb, as does the opinion elsewhere. hmu if you can help me solve this riddle. #thankyoufyoubye

This is a case that will likely cause Jim Cornette to fire some angry tweets. He might have a rant or three about it on his podcast. There’s still nothing he can do about it as Cornette took this matter to court and lost what could be a case that others can use as a precedent to protect their own right to free expression.