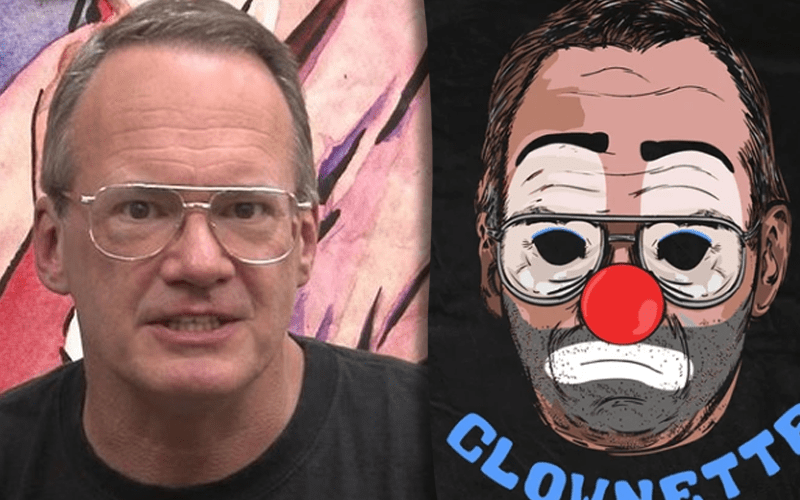 Jim Cornette is not afraid to take someone to court, especially if they are using his likeness to make a buck. He filed a lawsuit against multiple parties over a “F*ck Jim Cornette” t-shirt. Now a new t-shirt has his attention.

The same people Cornette sued over the “F*ck Jim Cornette” merchandise is now selling a “Clownette” t-shirt. Some fans have argue that this new merch falls under the definition of parody. In a statement released to Wrestle Zone, Jim Cornette is not about to let this one slide.

“My attorney Stephen P New gave these goofs the opportunity to pull down the shirts and remove the trademark application and we would all go our separate ways. Apparently Grover thinks some outlaw garbage wrestler can not only defy the law but ignore a nationally-known attorney. Now he knows he can’t, and he’s about to get a lesson in the real world. Any money we receive past expenses will be donated to charity, but our requests WILL be granted or Grover and his T-Shirt fellow will not only be begging fans for money to pay his medical bills, but also his legal bills as well.”

“If this in some way removes one of these “death match” wrestlers from exhibiting their ignorant “matches” to the public we will consider it a happy bonus for the fans and the wrestling industry. Not only are these matches in general offensive to me, but the idea of this clown asking wrestling fans to pay for his own stupidity, AND trying to make money off my name and likeness at the same time, was too much to ignore, so we are bringing some disinfectant to this disease on wrestling.”

We’ll have to see where this one leads. It seems like Jim Cornette is very tired of having his name dragged through the mud. We will keep an eye on this on-going story.