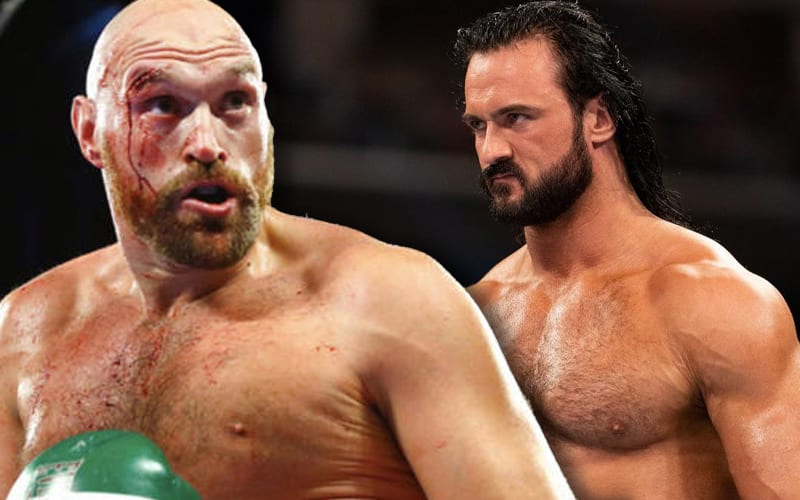 Drew McIntyre was taken out by Randy Orton on RAW this week, but The Viper isn’t the only man who wants a piece of the WWE Champion.

Tyson Fury and Drew McIntyre have fired shots at each other in the past. That teasing got a bit more serious when Fury uploaded a video during a recent train ride.

The undefeated boxer stated that he was thinking about how he wants to punch in the face. The first person who came to mind was the King Of Claymore County. Now Tyson Fury wants to do something about it.

“Been sitting on the train, after a long and busy weekend, and I’m thinking about people I want to punch in the face, and the first one that springs to mind is a big fella called, Drew McIntyre. Now, Drew, you’ve been having quite a bit to say about me, lately. I loved to punch your face in, honestly. Bang! Right in the lips.

“So, grow a pair, step up to the plate, and come fight the master — me. So, this is an official challenge video to Drew McIntyre, the WWE Heavyweight Champion of the world. I already knocked your pal out, Braun Strowman. I’ll do the same to you. Bring it.”

We’ll have to see if WWE can arrange a match between Drew McIntyre and Tyson Fury. The Gypsy King certainly seems to be pulling for this collision between big men.

Tyson Fury would need to make a trip to the USA, and likely undergo some sort of quarantine before he’s permitted to work the angle. It might have to wait until things are a bit easier in regards to making a flight from the UK.