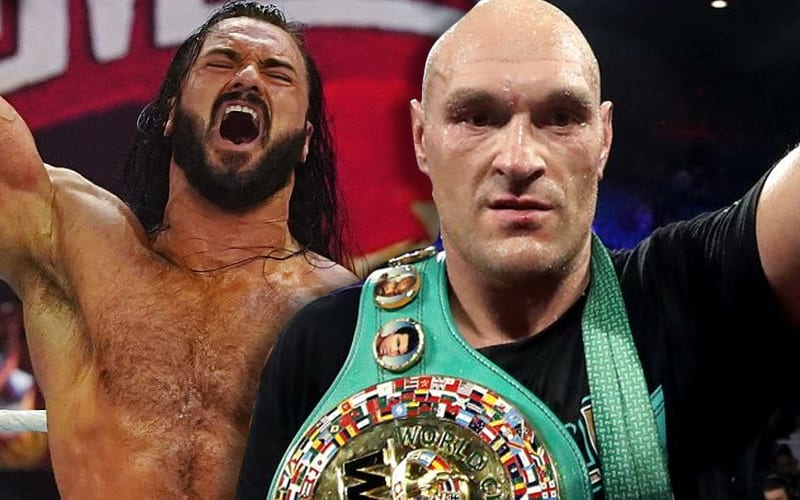 Tyson Fury is at the absolute top of the boxing world while Drew McIntyre has become the face of WWE in recent times. Fury and WWE have had a good working relationship in the past but the boxing champion’s return to the squared circle still hasn’t happened.

In the past, both McIntyre and Fury have traded verbal jabs at each other. The two men have expressed their interest in going head-to-head with each other on a number of occasions.

While appearing on After The Bell podcast, McIntyre talked about calling out multiple athletes from different sports ever since he became the Champion.

McIntyre and Tyson Fury have been pushing for a huge pay-per-view fight in the UK, something that hasn’t been seen since SummerSlam 1992. They’ve mentioned this possibility a number of times and it got to a point where people in the office began questioning him about it.

The Scottish Psychopath said that if he goes up against Fury, it will be on a big pay-per-view in the United Kingdom.

I started poking some bears. I started going after Tyson Fury, Colby Covington, soccer player Chris Sutton in the UK, even Conor McGregor.

Tyson and I have been going back and forth to the point where we’re trying to push this big UK pay-per-view that hasn’t happened since SummerSlam ‘92. And a lot of people have started talking about it to the point where people within the office are asking me, ‘Do you know something we don’t know? Is this really gonna happen? Because you talk about it so much, yourself and Fury have got a dialogue going to the point where you’re both main eventing this Summerslam pay-per-view.’

And that’s literally what I said. If I have to fight Tyson Fury in the UK to get this big UK pay-per-view…we’re absolutely gonna do it.

Once the world goes back to normal, maybe we will get to see a match between McIntyre and Fury in a squared circle. Until then, we must wait patiently.

Thank you to Cageside Seats for the quotes.