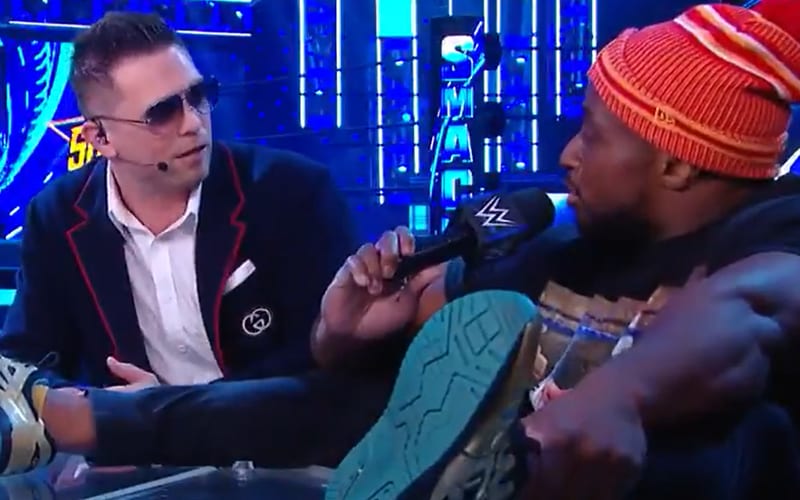 Xavier Woods and Kayla Braxton were supposed to be the hosts of Talking Smack. This made headlines as the news broke, but nobody told Woods about the new gig. This is why he wasn’t there.

Since Xavier Woods wasn’t there they had The Miz fill in. That created an awkward moment later on. Big E was on the show as a guest and he spoke about Kofi Kingston’s quick slide back down to the mid-card from his former status as WWE Champion.

The Miz said that is what happened to him as well. He said that Kofi just needs to work harder and he could have fought that slide back down the rankings. It was pretty apparent that Big E didn’t like hearing The Miz say that. The Miz was defending WWE, but Big E was trying to make a point of social commentary.

Big E then asked if it took Miz 11 years to get his first championship match. The mood got a little bit tense. The Miz and Big E are in somewhat of a feud on WWE television, but that comment might have struck Big E on a personal level.

Fans have commented about the moment as well. It was a rather tone-deaf statement to make as The Miz seemed to miss Big E’s point completely. Andreas Hale of The Sporting News called out The Miz in a big way and others are agreeing with his view on the matter.

– The invisible package of advantages

– The “I went through it too” and “just work hard” arguments

Big E was making his points and keeping a level head as The Miz continued to work like he was cutting a promo. Kayla Braxton eventually rallied the conversation back to an intended subject matter.

This was quite a way to start the return of Talking Smack. You can check out the clip below.