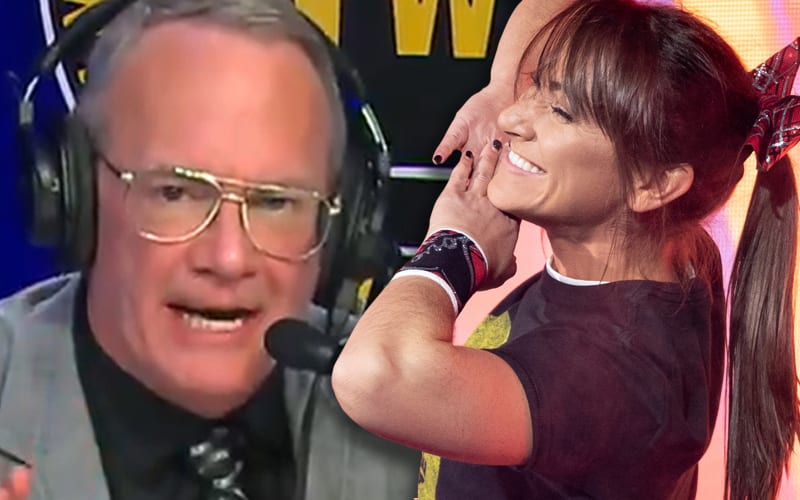 Jim Cornette doesn’t keep his opinions about pro wrestling a secret. Many wrestlers are on his bad list and some wear that like a badge of honor.

Kylie Rae recently tweeted out an animated gif of someone laughing while crying with a caption reading: “Me seeing all the wrestlers Jim Cornette used to sh*t on, rise above and constantly succeed time and time again.”

Jim Cornette replied to Kylie Rae’s comment. He didn’t seem to agree with her, or at least they have different ways of gauging success.

Rise above what to succeed as what? Sketch comedy? Skateboarding? High school theatre? Also, who dafuk are YOU again? More people have bought tickets to watch me take a shit. Mind your manners chickadee.

Kylie replied to Cornette saying: “Wow! Congratulations, what an achievement! Happy for you Mr. Cornette.”

One fan named Josh tweeted out to Kylie Rae asking her to accept defeat. He likes her and doesn’t want to see her get into this situation: “I like you but please, accept defeat here.” Kylie Rae replied back saying: “Hi Josh, no thank you.”

It seems like Kylie Rae is willingly stepping into Jim Cornette’s line of fire. She replied with another tweet saying: “LMAO you know I’m ‘tOo HaHA’ for Cornette. Come on now.”

We’l have to see if Jim Cornette does any research on Kylie Rae for a future episode of his podcast.