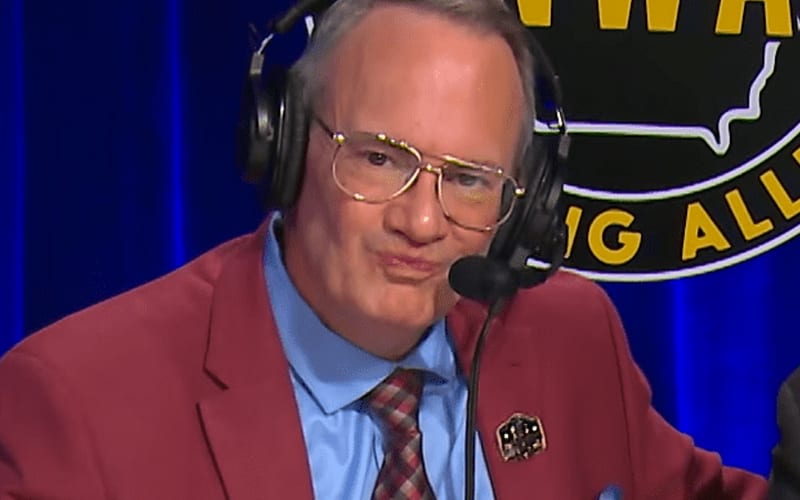 Jim Cornette and his wife Stacey were subjects of the #SpeakingOut movement. It was alleged that they groomed young wrestlers and were involved in predatory behavior.

Stories about Cornette were later backed up by his former long-time friend Kenny Bolin. Cornette recently opened up about this subject on his Jim Cornette Experience podcast in a big way.

Cornette claimed that he has never given any wrestler preferential treatment “if they would or would not engage in ribald relations with me or my wife.” You can find his complete comments below.

“You don’t think that these guys who became the most powerful wrestlers in the largest promotion in the world, especially during a period of time where John Lauranitis wanted to get rid of me, get me out of the way here at OVW, wouldn’t it have given him some help?”

“This wouldn’t have come up by now, as many f*ckin’ horrible things? Not one person that I ever supposedly made that offer at that time, ever privately, publicly stated it to anybody, eccetra.”

“I have never offered any wrestler, male or female, preferential treatment, a job a contract or push or anything else related to their employment or threatened the same or the opposite if they would or would not engage in ribald relations with me or my wife. No quid pro quo, not tit for tat as they say in some of these cases.”

“If you take out the manipulating people’s jobs accusations’ which we’ve just basically drawn and quartered as they say and illustrated was f*ckin’ ca-ca, what you’ve got left is I’ve been charged with having an interesting sex life!”

“That was how it hurt me the worst cause of course, you know me I don’t have human feelings and I don’t give a shit of what people say, but I was indignant that people would say that I’ve monkeyed with my job or the business or other people’s jobs, but then it becomes ‘Oh my God, they’re crazed sex maniacs.’”

Jim Cornette’s attorney alluded to the possibility that this matter could see its day in court. We will have to see how things progress. At this time Jim Cornette is saying that there was no quid pro quo.

We will keep a close eye on this story and everything else going on in the world of pro wrestling right here at Ringside News.