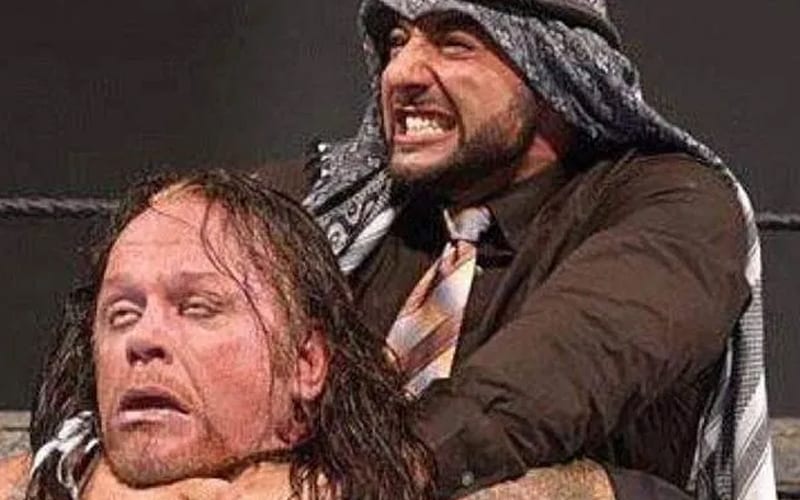 Muhammad Hassan’s run in WWE didn’t last long. His gimmick of a Muslim extremist didn’t age well at all, but it was wildly controversial at the time. Vince McMahon was forced to pull the plug on the whole idea.

Hassan left the pro wrestling world behind him after WWE. He is now in education, but he remembers those days in pro wrestling very well.

While speaking to Chris Van Vliet, he discussed how legitimately afraid people were of his gimmick. This was a sign of the times and a large indication of public perception which led to his gimmick being too hot for TV.

“What was this, 2004? We were just a few years removed from 9/11 and I remember a few instances. One I remember was San Francisco. I can’t remember the name of the hotel, Shawn (Daivari) and I were on the path walking from the parking lot to the hotel entrance and a lady was walking towards us and we had the full gimmick on and the glasses and my suit and 230 pounds at the time, so we looked intimidating.”

“She took her daughter off the path and walked like five feet away. I mean there was plenty of room for us on that path but she was scared. And one time we were on a plane, Shawn and I, and we were sitting towards the front and I think it might have been Shelton. Somebody came up and told us that towards the back of the plane people were calling their families to tell them that they loved them. So there were times when there were people who were really frightened and honestly it made playing the character pretty easy.”

This is the kind of fear that Mustafa Ali is fighting to extinguish to this day. WWE was a much different place when Muhammad Hassan was a character in the company and America was going through another uncertain time as well.

When asked if he was one of the greatest heels every, Hassan was humble. He then said that he might have been “on a relative basis” considering his very short run with the company.

“I wouldn’t say one of the greatest heels of all time. There were a lot better heels than me. Maybe on a relative basis for the 7 months [I was in WWE]. But I also had a great gimmick, I was pushed to the moon, I worked with some incredible veterans who wanted me to succeed, who wanted me to do well because they wanted to make money with me.”

“So I was very fortunate for the position that I was put in and I was with Shawn Daivari who was great. Shawn was a heat magnet. I would not have got the heat that I got without Shawn. And I think that’s why the character did so well for that 7 months because it was a character that people loved to hate. It was genuine hate and genuine heat.”

We’ll never know what Muhammad Hassan would have been able to achieve in WWE had he not done a terrorist inspired angle the week an actual terrorist event took place. You can check out that clip that WWE would like to forget below.

Tommaso Ciampa owes Muhammad Hassan some thanks for that program with the Undertaker over 15 years ago. A young Ciampa played Hassan’s attorney and things did not end well for him.