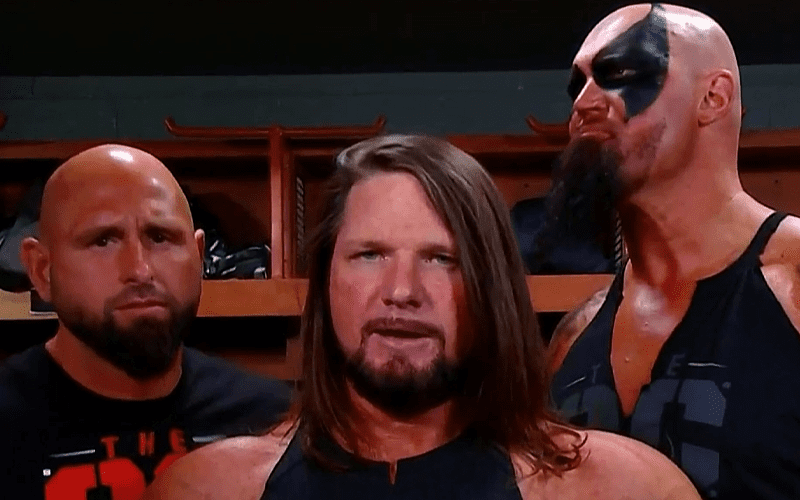 Karl Anderson and Luke Gallows spilled all the beans about their WWE release, holding Paul Heyman responsible for their release. AJ Styles was guilt-ridden after learning this and he went out of his way to look into the matter to arrive at the same conclusion as his fellow OC members.

Big LG recently appeared on WrestleTalk in The D for an interview and during the session, he revealed what AJ Styles told him after he and Anderson got released.

Gallows said that Styles apologized to him although he didn’t need to. The former RAW Tag-Team Champion said that although WWE gave them huge contracts to stay in WWE, that wasn’t the only reason why they re-signed.

He said that the other reason why they stayed was because they wanted to “roll” with their buddy AJ Styles.

He said he was sorry, which he didn’t have to say. and I wasn’t looking for an apology from him. But it’s been well documented and AJ said it himself over on his streaming service that he felt responsible for us staying when we wanted to leave, as well, WWE kept wanting to pile more money. That wasn’t the final reason we stayed, the reason we stayed was to be there and to roll with our buddy.

Gallows said that AJ is not to be blamed for their releases because he couldn’t possibly predict the budget cuts due to COVID-19. He said that no one forced them to re-sign with WWE and Styles only convinced them because he wanted the best for his friends.

We ended up getting released when the pandemic hit, but I couldn’t blame him for that, he couldn’t see the future. He just wanted to do what was best for his friend and that was to convince us to stay and we ended up staying but nobody forced us to do anything and the end of the day we made that decision right or wrong so there is no hard feelings there at all and AJ called me after 20 minutes when it was online and we talked and I told him what I am telling you guys now.

I don’t fault anybody for anything that ever happened in my career and at the end of the day you need to look at yourself in the mirror and this has turned into nothing but a huge positive. You can’t look in the rearview mirror, you gotta keep stepping forward.

The bond between Styles and The Good Brothers is as strong as before. Gallows and Anderson continue to make huge strides outside of the WWE while Styles continues to be Phenomenal on SmackDown as the Intercontinental Champion.