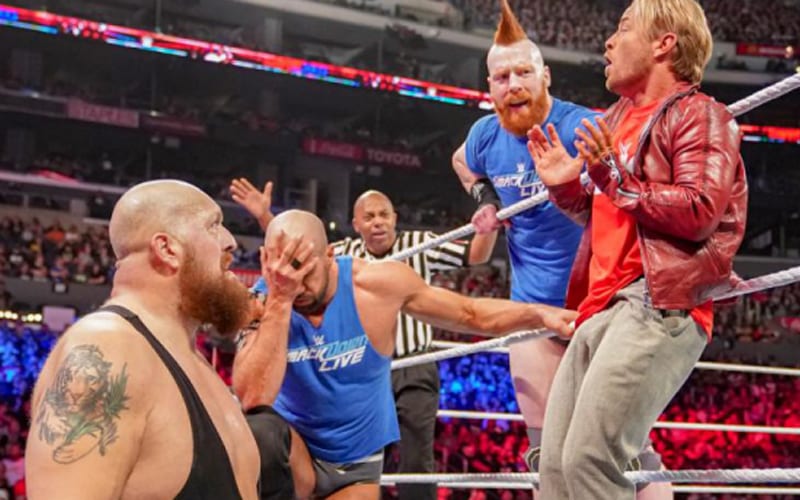 Drake Maverick has been able to have a lot of fun on WWE television, and he’s not done yet thanks to re-signing with NXT. One famous moment from the 2018 Survivor Series saw Maverick wetting his pants, but was it legit?

While speaking with Metro, Drake Maverick revealed that there was a contraception to wet his pants for him, but it malfunctioned. That created a situation where he had to muster the energy and fortitude to urinate in his pants for real.

In the end, the segment went off without any problems, and he got some major props in the dressing room for the stunt too. Some fans didn’t fully appreciate what Maverick did, but he really put his pants on the line at Survivor Series.

“I’ve been through many obstacles in my life, but peeing in front of thousands of people is probably the most difficult. Especially when the contraception breaks, and you’re only way out is to do so. I’m glad I am a hydrated young man, I will say that. Every time before I perform, I say a little prayer and I think to myself, ‘I’m nervous, I need to go for that nervous pee’. And I always have to have a little tinkle before I go out. I kinda held it in that day. What a day. You really don’t understand the respect people gave me just for being able to pee on cue like that. I will do anything because… I mean, it’s my job! My boss wants me to piss myself – OK boss! Whatever you want me to do. If Harrison Ford’s asked to do something when he’s Indiana Jones, I’m sure he’ll do what’s on the script. It’s the way it is. The only difference is Harrison Ford’s not handed the script on the day!”

Drake Maverick loves WWE. His passionate video message following that April 15th release is a big part of why he was offered a new contract. He also took every moment he could on screen and made something out of it. This is something he’s done his entire time with WWE whether he was a manager, chasing the WWE 24/7 Title, or peeing himself on cue.

We’ll have to see if Drake Maverick ends up peeing on himself again someday. Vince McMahon knows that Maverick can pull it off, so he’s lucky it didn’t become his new gimmick.