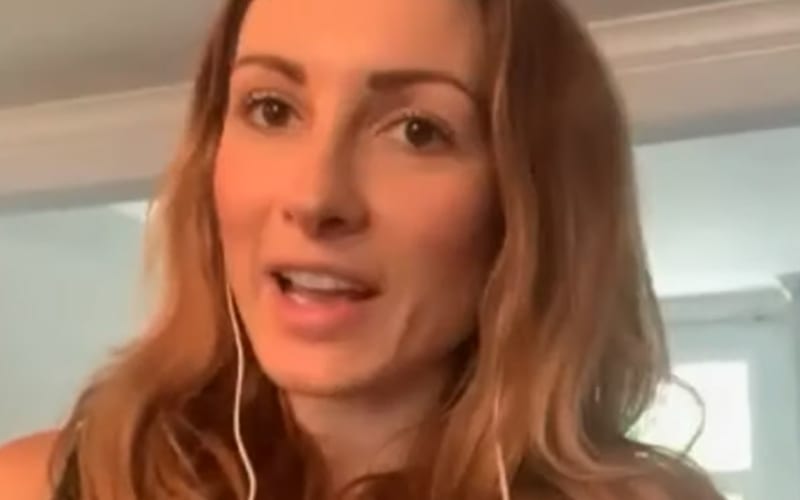 Becky Lynch revealed that she is pregnant which called for to take a hiatus from WWE. She is very happy to be at home, but she obviously misses her time in the ring. The Bella Twins are also pregnant and they recently spoke with The Man about their shared experiences.

On the Bella Twins’ YouTube channel (transcription by Ringside News), Becky Lynch said she felt sick and nauseous during her first trimester. She was able to work out, and she’s still going to the gym, but she “can’t push anymore” with her workout. “You don’t know what’s going on so you worry about everything,” she said. The Man also admitted that she might have been “overly cautious about everything.”

The Man said she also lost weight during her first trimester, but she wasn’t eating much. She was also very excited to have a chance to get some extra sleep after so much time on the road. After she was asked about what was going on in her head when discovering her pregnancy, Becky Lynch was very candid in her reply.

“I knew I wanted to have a baby before I was 35 and then I met Colby [Seth Rollins] and I was like, well this is perfect, this is my person. So this was always the plan. Originally I was like ‘I’ll wait until I’m done wrestling and then I’ll have a family.’ Then I was like, ‘wait, why do I have to do that? Guys don’t have to do that. Hell, I’ll just do it whenever the time feels right.'”

“So we started trying and I just thought it would take a long time, and it didn’t. It happened immediately. We were super lucky. So it happened before it was expected and I was still champ at the time. When we came back from WrestleMania I was feeling sick already and this was too early to take the test and then I got the early response ones which are the ones with the lines. I took one and Colby didn’t even know I took it and one line popped up real quick, but I didn’t even read the instructions so I was like, ‘oh negative line I’m so not pregnant’ and I threw it into the bin and then he came back from the gym that night and I took it out and I was like, ‘wait, hang on there’s a second line here.'”

The two Googled how to read the results and realized that they needed to try another test. They finally got a digital test after not being able to tell with a second try. The words popped up on the digital screen the third time. That’s when they knew for sure that The Man was going to be a mom.

Becky Lynch gave all signs that she plans on getting back to the ring. We’ll have to see what kind of schedule Vince McMahon convinces The Man to take. WWE could certainly use more star power so McMahon might be counting down the days until he can give her a call.