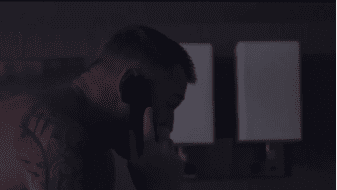 Heath Slater was one of the Superstars who were released by the WWE on April 15th as a means to cut the budget. However, he was brought back on an episode of RAW as part of the feud between Dolph Ziggler and Drew McIntyre.

Slater faced McIntyre that night for the WWE Championship but was squashed by his former 3MB friend. However, the two men embraced after their match and shared an emotional moment together.

Slater was against making his RAW return but McIntyre, the man responsible for coming up with the idea in the first place, convinced Slater to do it.

Now, Slater’s 90-day no-compete clause is up, and like the others, he’s ready to write the next chapter in his pro-wrestling career. Slater posted an emotional teaser on his Instagram in which he dreams of his lowest moments in WWE while also cutting to videos of his daughters.

At the end of the video, Slater receives a literal “wake-up call” that gets him out of his nightmare.

In the caption for the video, Slater talked about the process of making his dream of becoming a pro-wrestler into a reality. He then said that although he didn’t leave WWE on his terms, his future choices in the business will be on his terms.

Slater said that in the past 14 years, he lost the man he believed he was but now, it’s time for him to reignite his fire. Slater once again asked everyone to watch the hell out.

When I was young, I dreamt of having a place just for me inside the squared circle. With the help of my Mom and Grandpa, I made that dream my reality. At 23 years old, my priority was me and only me. I lived the life that the old timers told me about and life on the road was everything I thought it would be at first. As the years went on my career evolved and so did I. I became a man, a husband and a father. Year after year, loss after loss my time in the ring became less and less fulfilling and my time at home became more and more precious but there was never a healthy balance between the two.

Leaving WWE may have not been on my terms, but moving forward the choices I make regarding my career and my life will be ONLY on my terms. Over the last 14 years, I lost the man I thought I was… but Thank God I’m finding him again. I’m ready to reignite my fire. I’m ready to be the wrestler I was meant to be, while being the father and the husband that my family deserves. Now it’s my turn and I’m going to rise. So y’all better watch the hell out.

Many are expecting Slater and other former WWE Superstars to make their debuts for Impact Wrestling at tonight’s Slammiversary. The event starts at 8:00 PM EST and we will have full coverage here at Ringside News.