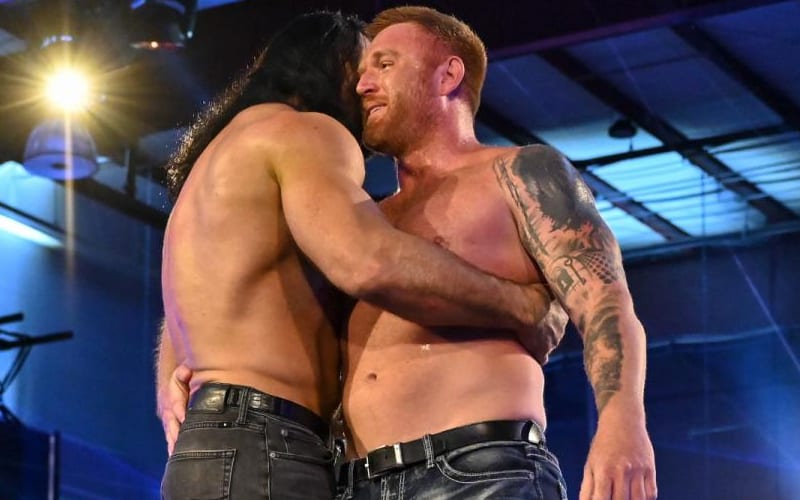 WWE saw the return of Heath Slater for one-night only. He faced Drew McIntyre in a very short match which Ringside News exclusively reported would happen. Heath Slater needed some convincing to come back.

While speaking to Talk Sport, Drew McIntyre admitted that he played a big part in bringing Heath Slater back to WWE for one night. Slater was “a little bit against it.”

Slater’s wife had to remind him how he felt when McIntyre was released. The WWE Champion said his former 3MB stablemate has moved on mentally from WWE. It was still nice for him to come back for a segment.

“The moment at the end was very special and I was very much pushing for that idea to happen.”

“I think I saw something on the internet saying I was behind it and I’m thinking how are they getting this information?! But yeah, I played a big part in making it happen and to be honest, Heath was a little bit against it and I spoke to my wife right before the phone call I made to Heath to try and convince him to come onto the show for the segment.”

“She reminded me how I felt at the time when I was released and sure enough, he felt the same. He appreciated the opportunity with WWE, it was where he had made his name, but mentally he has moved on.”

“He’s ready for the next stage and he’s not sure about going backwards, so I made it clear to him like ‘trust me, this isn’t going to be like anything you’ve done.’”

“The first thing I did outside of WWE was ICW and I showed my real personality and it caused a buzz and went viral on the underground, but if you get the chance to show your real personality on RAW that’s going to set you on the right course.”

“I know he’s been working out hard, so people will get to see what he looks like now and it also advances our story – everybody wins.”

“We finally got him on board and got him on the show – he absolutely killed it, like I knew he would.”

Heath Slater stated that it was like a closing of a chapter to come back. He might find himself rejuvenating his career and making a return to the company. Then he can fulfill the prophecy of all three members of 3MB being released from WWE only to come back and grab the company’s top title.

People like Booker T think that WWE should re-hire Heath Slater. How do you feel about the subject? Sound off in the comments below!