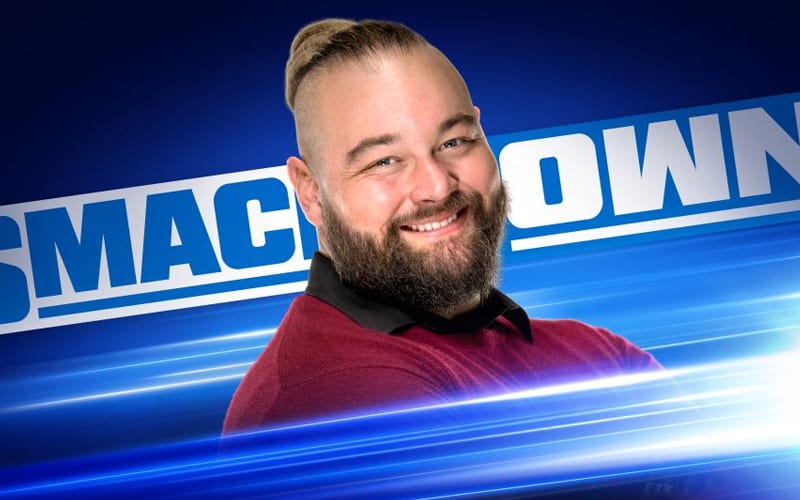 Tonight’s SmackDown will be the final episode before the Horror Show at Extreme Rules. There is a lot planned and the pay-per-view is expected to see some possible additions as well.

Alexa Bliss will host A Moment Of Bliss segment, but her guest is a mystery. Let’s see who WWE pulls out to speak with the Five Feet of Fury.

Bray Wyatt will star in a brand new episode of the Firefly Fun House. He faces Braun Strowman in a Wyatt Swamp Fight on Sunday. That will likely be the focus of his sketch tonight.

Also, AJ Styles vs Matt Riddle will go down with the IC Title on the line. That should be a good match. Click here for the spoiler.

They played a few clips to hype tonight’s show. The music was way too dramatic. It looks like Morrison is taking on Braun Strowman. Cesaro is also facing Big E tonight to determine the stipulation at Extreme Rules. The music was seriously awful. It was orchestral and like something from a Michael Bay film trailer.

The winner of this match will get to determine the stipulation for their match at Extreme Rules. They started out with Big E putting Cesaro into the steps and then he put a knee to him before returning to the ring.

Cesaro moved and Big E took a post. Then Cesaro dropkicked Big E out of the ring. Cesaro went outside to rough up Big E and then put him in the ring where he hit a cross body move off the top rope.

Big E fought out of a chinlock, and then Cesaro slammed Big E down and got a two count. Cesaro climbed up top and Big E caught his dive this time and started hitting Belly To Belly slams. He got three off and then he did a swivel before nailing a splash.

When we came back from commercial, Big E got Cesaro in a stretch muffler submission. Then Cesaro out, rolled through into a two count and then he did a swing before getting a Sharpshooter in one fluid motion. Cesaro transitioned that into a crossface as Nakamura took Kofi out.

Cesaro hit a Nuetralizer on Big E and won.

The heels went to get tables, but Kofi hit a dive on them. Kofi set them up on a table, but the heels got away.

Bliss predicted a few things. She said that Strowman is going to win on Sunday. Then she said her mystery guest is going to do very well on Sunday. She’s going to “blow the roof off this place on Sunday.

Nikki Cross thought it was her, but she wasn’t Bliss’ guest. She asked Cross how many nitro brews she had today.

Bayley came out and told Cross that she needs to get used to losing. Because she’ll lose on Sunday. Bayley said she’ll knock them senseless which won’t be hard because they don’t have any sense.

Bayley talked up the Women’s Revolution’s 5 year anniversary. She said they built this place, the set up the ring, and they’re going to reign victorious this Sunday.

Bliss said that she didn’t get to finish introducing her special guest. Out comes Asuka. Bayley and Banks jumped Bliss and Cross.

Asuka ran down to help them. Then Bliss called for a tag team match. She was in street clothes, but Cross and Asuka were dressed to compete.

They started off with Bayley and Nikki Cross. Then Bayley tagged Banks, but the referee didn’t see. Bayley got in a cheap shot when the referee wasn’t looking.

Bayley continued to maintain control over Cross and Banks hit another cheap shot when the referee was distracted again. Banks took a tag again and they continued to isolate Nikki.

Nikki tried to fight back, but Banks shoved her back into the corner. Then Bayley tagged in and continued to put the pressure on Nikki until she got loose and tagged in Asuka.

Banks finally got a tag after Asuka took a beating to Bayley. Then Asuka hit a double clothesline on the Women’s Tag Team Champions.

Asuka ended up on the outside after she was tossed out. Banks got trapped in the ring apron and Asuka hit her. Cross tagged in and eventually caught Bayley in the apron as well. Cross beat on Bayley as well.

Then Nikki and Cross got on the announce table and started dancing as they cut to commercial.

They continued after commercial and Asuka battled Banks who had the advantage. She kicked Asuka down in the corner and then tagged in Bayley.

Bayley hit an elbow drop for a two count. Then Banks tagged in and locked on a head submission before Asuka charged at her, but Banks sent herself back into her own corner so Bayley tagged in again.

Asuka went ballistic and then she hit forearms all over the place, nailed Bayley with a knee, and made a tag to Cross. Banks came in as well.

They fought as Cross gained advantage with a dropkick. Then she sent Banks across the ring before charging into the the corner and nailing a bulldog.

Nikki missed a cross body from the top and Banks got a two count. Bayley sent cross out of the ring and then Nikki used the announced table to hit a tornado DDT. They went back in and Banks got involved.

Banks kicked Asuka out of the ring and Bayley tried to tag Banks, but Banks went for the knees off the apron on Asuka, but she missed.

Bayley blocked another tornado DDT attempt from Cross, but she got a roll-up pin, used the ropes, and won.

Miz and Morrison were backstage talking about John’s upcoming match against Strowman. Miz convinced him that he will “slay the monster.” Morrison wanted a best friend who might step up and face the monster. The Miz wasn’t feeling that.

Bray Wyatt was in his OG Wyatt persona in a swap. He was humming He’s Got The Whole World In His Hands.

He said the swamp is “beautiful and peaceful.” Then he said the rattlesnake’s skin is the same color as the leaves. He called Braun a lost sheep looking for a home when he came in. He said that he gave Braun a purpose and he created the monster.

Then Wyatt said “he left, or so he thought.” He said “this is a place where darkness comes to light, where the devil comes to dance where all of the horrors of the world feel right at home.” He said “A part of you will live here forever.”

Wyatt said it’s apparent that Strowman can’t control the monster so he must destroy the monster he’s become. This swamp fight should be fun.

Braun cut a promo where he said he’s willing to kick in the gates of hell to kick the devil himself in the face. He’s going to end Bray before he ends Braun. Then Strowman went for the ring and Morrison took off.

It took a while before Morrison got back int he ring. Strowman immediately tossed Morrison across the ring and clotheslined Morrison hard. He stood on Morrison’s chest and he continued to demolish Johnny Drip Drip.

Then Strowman latched on a chokehold, hit a runnning powerslam and won. Morrison got zero offence in.

After the match, Morrison had to be helped out of the ring. They made it a very long process as Morrison said: “I can’t feel my fingers.”

They have a match this week to give some semblance of a reason for last week’s karaoke segment.

Prior to the match, Lacey Evans said Naomi’s Glow will be “nothing but a little sparkle.” Naomi’s entrance is even cool in the Performance Center.

Lacey tried to take Naomi down, but she was stopped. Naomi threw Lacey into the corner and nailed a sliding knee. Then Lacey went to the apron on the other side, nailed a legsweep and a slingshot elbow drop for a two count.

She dragged Naomi to the corner, but Naomi kipped up after countering Evans. She hit her splits leg drop for a two count.

Naomi avoided a Women’s Right and hit a leg scissors. Lacey went to the apron and Naomi kicked her before pulling her in. Then Lacey Evans tied Naomi’s hair to the ropes.

The referee untied Naomi’s hair and Lacey hit a Women’s Right for the win.

They started out slow. AJ backed Riddle into the corner and then Riddle took Syles down with a series of suplexes. Styles got on the apron and Riddle nailed a knee off the top that sent Styles out of the ring.

Styles pounded on the announce table out of frustration and Riddle came out to mock him and kick his head off. Cut to commercial.

Riddle continued to maintain control of Styles after the commercial. He had Styles down grinding him down with knees and trying to get a submission, but AJ got to the rope.

Riddle hit a fisherman’s suplex for a two count. Then Styles sent Riddle face-first into the mat to turn things around for him.

Styles nailed a kick and a dragon screw. Riddle got to his feet and AJ continued to work on Riddle as he kicked him down and got a rear chinlock.

Riddle turned things around, hit a senton, a kick, a Bro To Sleep, powerbomb, and a running knee for a two count.

Styles hit a stiff clothesline as we came back from commercial. AJ kicked Riddle’s leg, but Matt returned with a German Suplex.

Riddle punched and kicked AJ in the corner before AJ kicked Riddle in the jaw to settle him down. Styles nailed a flying forearm in the corner and tried to get a Styles Clash, but Riddle blocked it. Riddle landed on his feet off a suplex and he nailed a Final Flash knee.

Riddle climbed up and went for a Floating Bro, but Styles moved. AJ suplexed Riddle into the ring from the apron for a two count.

Styles nailed a knee to the back of the neck, but Riddle kicked out at two. AJ went to the apron, but Riddle caught him and tried for a Bro Derek, but AJ got out of the move.

AJ nailed a few strikes. Styles then got a calf crusher, but Riddle tried to turn it into a Bromission. Then AJ got a roll-up pin and just won.

After the match was over, AJ Styles gave Riddle a handshake. Then Corbin jumped Riddle from behind and pummeled him. King Corbin capped off his assault with an End Of Days.