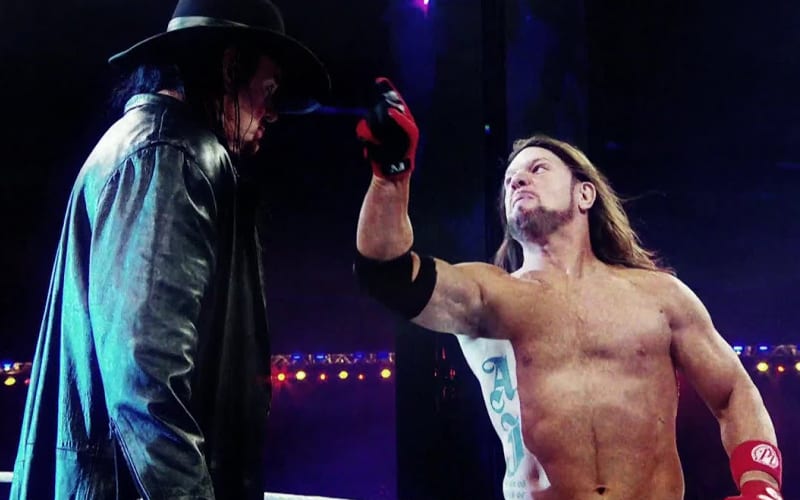 The Undertaker is said to have wrestled his last match, but if he decides to have another go in the squared circle AJ Styles is waiting for him.

Fans thought that WWE was preparing AJ Styles and The Undertaker for another match. Then the finale of the Last Ride docuseries included The Undertaker saying that he’s okay with calling the Boneyard Match his last.

ViBe & Wrestling recently spoke to AJ Styles where he expressed a desire to work with The Undertaker again. He would love to push his own body to the limit with The Deadman. He also understands that Taker loves the business as much as he does.

“I definitely think I have more, I’m going to push this body to the limit. I enjoy what I do, I respect what I do and I am proud of everything that happens in the ring so I’m going to do this as long as my body and my mind allow it. Many times my body and my mind argue with each other because my head tells me I can do it and my body tells me not to even try. I think you both have to agree and think maybe this is a good time for me to quit but when will that happen? This is something Undertaker has already talked about and it is something that happens every day because you love what you do.”

The Boneyard Match provided Styles and Undertaker with some unique opportunities. Styles is more than open to wrestling The Undertaker in a typical wrestling match, even if it’s in front of 1,000 people in a limited seating environment. He isn’t holding his breath on that happening considering The Undertaker’s public retirement.

“Yes, definitely. If that means that he returns to a ring and we face in front of thousands of people, I would not hesitate for a moment. but will it happen? Would he be able to accept it? Probably not. If he decided that his career is over, I respect it. He has already done everything he had to do and has said, ‘That’s it, I have had enough’, and believe me, I know what it is like.”

“I can’t imagine doing what he has done for so long, it’s hard, I can’t … So I think he has earned the right to say ‘enough’ when he has thought it was convenient, but obviously I would offer him that opportunity.”

The Undertaker’s last match very well could remain as the Boneyard Match at WrestleMania 36. You can also never say never because pro wrestling has a way of changing minds even if retirement seems to be set in stone.

CM Punk spoke about how he thinks The Undertaker will wrestle again. Big E has the same opinion. Do you think Taker has another match in him despite all of the #ThankYouTaker tweets? Sound off in the comments below!