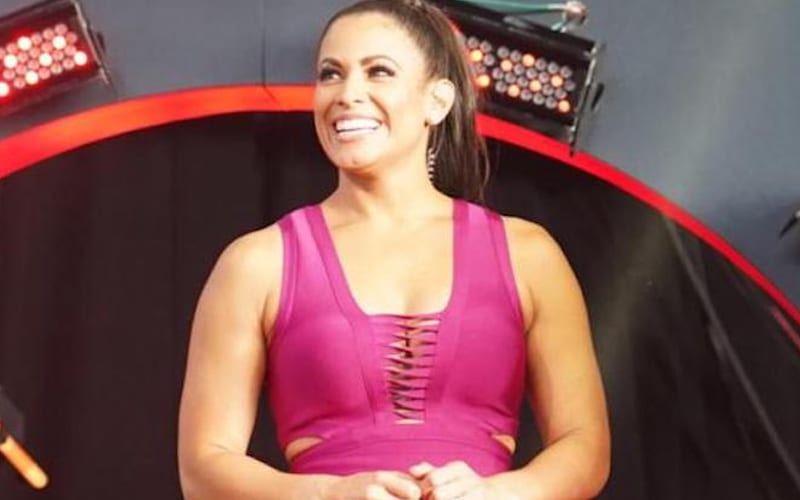 Dasha Fuentes was an interviewer for WWE, but Vince McMahon didn’t like her robotic style even though it was at the company’s directive. She was released from the company, but Dasha didn’t stay unemployed for long.

Fuentes became Dasha Gonzalez in AEW and sat in as their timekeeper during early shows. She eventually found her way onto the Spanish announce table as well.

While speaking to Wrestling Inc, Dasha Gonzalez discussed the opportunities that AEW has afforded her. She has much more freedom to express her personality as well. It is a learning process, but she is very happy with her current employer.

“I’m still learning. It’s pretty amazing all of the opportunities All Elite Wrestling has afforded me,” Gonzalez said. “It’s allowed me to prove to everyone I’m more than a microphone stand and asking questions. I’m allowed to be creative, have input. I’m having the time of my life with them.”

It was much different to produce wrestling content without any fans present. She stated that it has also given AEW a chance to bond as a pro wrestling family.

The transition was difficult, but they seem to have been able to figure out enough creative alternatives to make things work.

“With everything going on in the world, it’s pretty cool. It has allowed us in All Elite Wrestling to bond as a family. We all have one common goal. To give everyone at home a release and something to look forward to and enjoy every week.”

“It has been strange because you always feed off the energy of the fans. Our fans are the heartbeat of wrestling. That has been difficult, but it has been amazing to connect with our fans on a deeper level through social media.”

“All Elite Wrestling has been very creative having the talent be ringside. All of us get tested before we compete or go out. We wear masks backstage. It has just been incredible to be able to be a family. Justin wasn’t able to travel, so I was able to step up and help out. After that the wheels keep moving and going.”

Dasha Gonzalez currently appears on The Titan Games. She said that some fans had no idea she has a background in gymnastics or that she trained to become a pro wrestler.

The heartbreak might still be there in a way following her WWE release. She carried on and seems to be in a very good position as her career has even more options now.