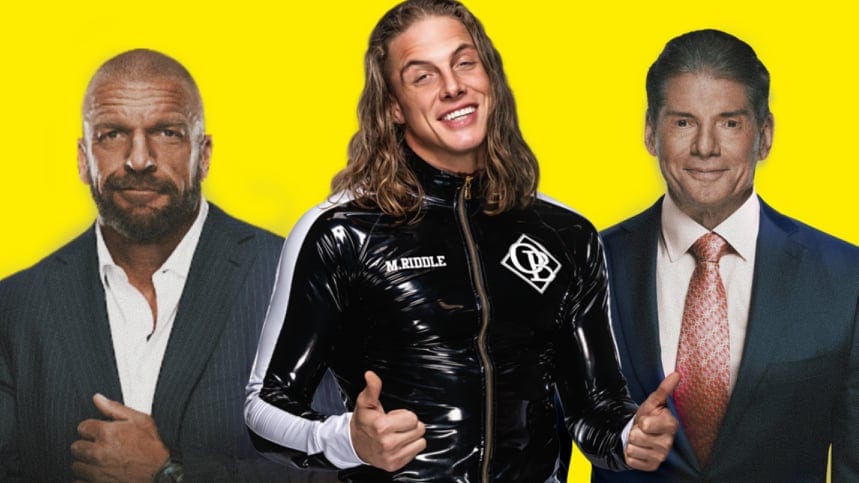 Matt Riddle was recently a guest on Ariel Helwani’s MMA Show. In the 30-minute long interview, Riddle talked about many things – ranging from his UFC history to his marijuana usage after signing with WWE.

On the show, Riddle was also asked about his relationship with his bosses in WWE – Triple H & Vince McMahon.

The Original Bro revealed that he and Triple H have an “amazing” relationship. The two men joke around with each other and appreciate the hard work that goes into making it as a sports entertainer.

Honestly with Triple H, amazing. I mean, I don’t think we are like family but he showed me videos of his kids like imitating my entrance in his house and stuff during the quarantine. And we joke around and I think we both appreciate the hard work in being a sports entertainer. We appreciate the business.

Riddle then talked about his relationship with WWE CEO Vince McMahon and said that he doesn’t know him as much as he knows Triple H. However, the former NXT Tag Team Champion had words of praise for McMahon’s professionalism and his drive towards his product’s well-being.

He also said that he “really likes” McMahon and that the Boss “challenges” and “corrects” him whenever they interact with each other. Riddle also feels like he can bring what McMahon is looking for to the table and that all of them are going to get along just fine.

Vince, I mean I don’t him as well, I’ve only had a couple encounters with him. But the guy is a 100% professional. You know like, it’s almost crazy how professional he is, how focussed he is about his product and how hard he works to try to make it what he wants it to be, you know?

I like him. I like him because, you know, I think a lot of people like you said, because of my background and stuff don’t challenge me and I feel like every time I’ve spoken with him or had conversations with him, he challenges me, you know? He corrects something about me, you know like ‘Hey you shouldn’t do that’. And it’s good stuff, it’s all knowledgable.

So it’s like, I honestly, I really like being with Vince. So far it’s only been short-term but maybe that will change. But he seems like a cool guy. As long as you know what you’re doing, you can be successful and you can perform, I mean I feel like that’s what these people are looking for and I feel like I can do that to the T. So yeah, I think all of us are going to get along pretty well.

Matt Riddle will be making his main-roster debut on this week’s SmackDown on FOX. It will be interesting to see how Riddle’s journey in WWE pans out from this point on.

If you use any quotes from this article then be sure to credit Ringside News.